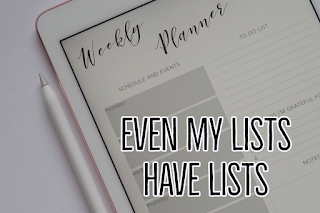 If I were ever to get a tattoo, it would probably be this. 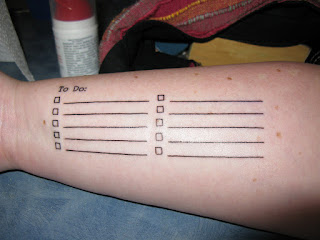 I am often asked, "How do you get so much done?"

I'm telling you it's because of my lists.

Don't you love crossing something off a list?  It's almost as satisfying as clicking "Skip Ad" on a YouTube video. 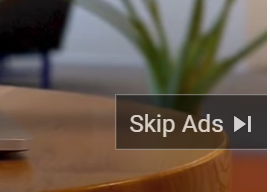 But what about all those unchecked items?  How you do feel about those?  Do they induce regret?  Guilt?  Anxiety?

If so.  Read on.  I've got some good news coming your way.

First I want to tell you a story about someone named Spencer Cox.  If you live in Utah, you are probably pretty familiar with his name.  If you don't, you might not know who he is.

Spencer Cox is the lieutenant governor for Utah serving with Governor Gary Herbert.  Here's one of my favorite stories about Lt. Gov. Cox.

One day Gov. Herbert had to go in for surgery to have kidney stones removed.  As per protocol, he relinquished governorship to Lt. Gov. Cox.    You can read about what happened on Twitter.

Before the surgery Cox measured the drapes in the mansion. 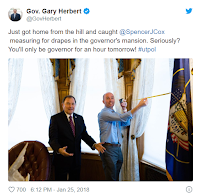 Then he made himself at home. 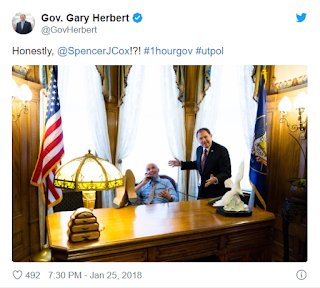 Once Governor Herbert was under the knife, he got right to work. 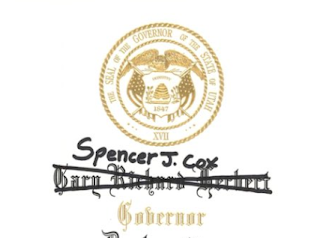 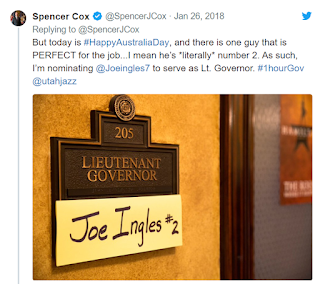 The Jazz were okay with it. 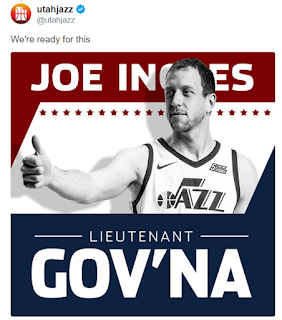 He moved the state capitol to Fairview.

He tried to commission a portrait artist. 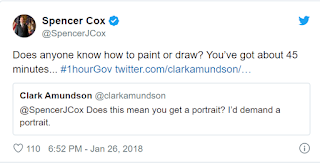 And then tried to do something I am NOT okay with.  Take a corner of Wyoming.  (You can keep your corner, Wyoming.  We wouldn't want to make drawing your state any harder than it already is.)

He also has a podcast called Cox and Friends.  It's pretty interesting if you want to take a listen.

But Lieutenant Governor isn't the only title Spencer Cox has had.  He's also had the title of Mayor and the title of Bishop--at the same time.

As you can imagine being both a mayor of a town and a bishop of a congregation would be a lot to navigate.

He said that he turned someone's power off on Friday as their mayor, because they didn't pay their bill, and give them a check on Sunday as their Bishop so that they could get their power turned back on.

Spencer Cox told Kurt Francom on the Leading Saints podcast a story that had a huge impact on me.  I hope to relay it correctly, but you might want to listen to the episode here to make sure I got it right.  Go to 20:10 for the story I'm about to tell.

When Spencer was first called to be a bishop, he went to a stake training meeting for all bishops. He took notes during the meeting creating a list of things he needed to do while the bishop.  The list came to 27 items.  As he pulled into his garage that night, before he got out of the car, he started to cry.  The list was too overwhelming.

He cried out for help.  The Spirit told him to put the list away and not to look at it.  God had something else in mind for him to do as the bishop.

Years later, Spencer was released from his calling.  He was cleaning out the bishop's desk in the church when he came upon that list with 27 items.  As he reread the list, he saw that some of the things on the list he had actually done, but others he had never accomplished.

So here's my question for you.  Was it a waste of time for Spencer to go to that stake meeting?  Would he had been better off at home spending time with his wife and kids?

I submit to you that the answer is no.  He absolutely was where he needed to be that night.

So was the stake president wrong to give a 27-item list to the bishops?

Again, I say no.  I'm fairly certain the stake president told the bishops exactly what they needed to hear.  And who knows, maybe one of the bishops framed his list after diligently check off every item.

So what happened to Spencer as he sat in his car that night with tears streaming down his face?  I think he did what every single one of us need to do with every list we have.

We place it on the altar before the Lord.  We say, "This is my offering.  This is everything I think I need to do.  Here you go."

And what happens next is what is truly amazing about the atonement of Jesus Christ.  The Lord takes our list from us. 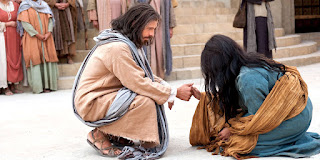 He carries the burdens from that list.  What he does next is truly miraculous.  He gives us a new list. 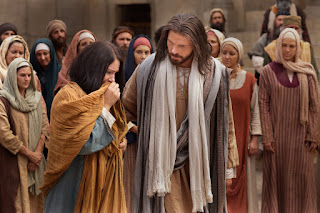 This list is shorter than the list we give Him.  He says in essence, "Here is what I need you to do."  And what we need to remember is that each of us might be handed back a different list.

Maybe my plate isn't as full as another's because God knows my capacity.  He's know that even just getting dressed to go to church is enough, even if I don't get out the door.

Sometimes I pray over my lists.  I really do.  I will make them and ask, "Did I miss anything?  Is there anything I can cross off right now because I don't need to do it?"  Sometimes it changes, and sometimes it doesn't.  And sometimes even then I don't get everything done on my list.  In fact, I rarely do.


My spirit animal is a hummingbird. 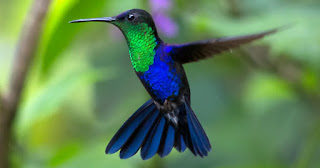 My brain pretty much works the same way a hummingbird flies.  I am constantly thinking of new ideas.  Sometimes they flit away and I never think of them again.  Other times the idea hovers in my brain in one spot for quite a bit of time.  Making a list is what lets the idea stay awhile.  It frees up my brain so I can then come up with new ideas.

I don't feel bad about unchecked items on my lists.  They are just little hummingbirds that flew away.  The only list that really matters is the one that God gives me.  But I find it's hard to get a list from Him before I offer one to Him first.

Fortunately, His is always better... and shorter. 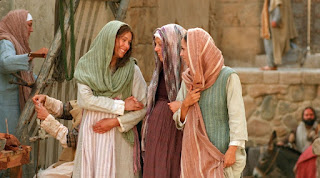 And THAT is how I'm able to get stuff done.

This article was inspired by Book of Mormon Central's video
Come Follow Me (Insights into Mosiah 4–6, April 20–26)

Not an official publication of The Church of Jesus Christ of Latter-day Saints.

Diana Lacey said…
I love this article so much! I used to make list after list and get frustrated because the more I checked off, the more the list seemed to grow! (I don’t know how that happens.)
Then I was called to be the ward YW President. I had 5 little kids. I cried. Then a wise woman put her arm around me and said, “all you need to do is to love them.”
April 25, 2020 at 9:34 PM

Courtney said…
I can relate to this article so much. I feel I could’ve written it myself, just not as eloquently. This is one of the best articles I’ve read in a long time. I just stumbled upon your blog a few days ago and have devoured almost all of it. Keep it coming, I’m really enjoying it!
October 4, 2020 at 9:47 PM