July 06, 2019
In Acts we learn that the Saints had all things common (see Acts 4:32).  This meant that those who had assets were to liquidate them and give the gains to the apostles for distribution.  This is also known as the law of consecration (see D&C 78:5-6).  The point of this was that everyone should not lack for the necessities of life and all are unified.

Ananias and Sapphira had a possession that they sold.  But instead of laying all the proceeds from the sale at the feet of the apostles, they withheld a portion and kept it for themselves.  Through the gift of the Holy Ghost, Peter recognizes that Ananias is not being honest and calls him out on it.  Ananias falls down dead.

As I read this story, I find some powerful lessons for us today.

LESSON #1 - Money does not equal happiness.


While living on this mortal earth, I think it's easy to get caught up in what is known as the Hedonic treadmill.

For those not familiar with the concept, the Hedonic treadmill is a cycle where one believes that purchasing items will lead to happiness.  The problem with this belief is that while purchasing an item does bring temporary happiness, we adapt to the change and go back to how we felt before.

I saw this living in New York City.  Some of the richest people in the world live there.  You'd think they would be sitting in their penthouse overlooking the Hudson River sighing with relief that they have finally "made it."  But no.  I know of one individual who felt like he was less than his peers because he didn't own his own private jet and had to charter one.  (You know, like how us little people do.)

Why did Ananias and Sapphira hold back part of their money?  I can only guess that they thought that somehow by doing so they would be happier.


One reason why I think it's easy to get on the Hedonic treadmill is because we assume that what we purchase we actually own.  We see our money as ours because we earned it.  But let's follow that logic.

How did you get that couch?

What did you use to buy it?

Where did you get your money?

How did you earn that money?

By working at my job.

How did you get that job?

Because I have a degree in that field.

How did you get that degree?

I earned it by going to school and getting good grades.

How did you get good grades?

Because I am smart and work hard.

How are you smart and able to work hard?

Because I have been blessed with intellect and good health.

And who blessed you with intellect and good health?

I have heard many people ask if members of the Church of Jesus Christ of Latter-day Saints are "forced" to pay their tithing.  First of all, no.  There is no tithing police that come knocking at your door and arrest you if you don't give up 10% of your paycheck.

However we do have cute little deacons who come by once a month to collect our fast offerings. 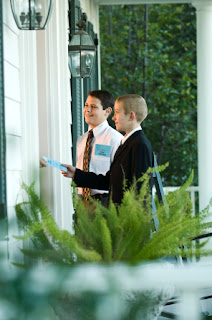 It appears that Ananias and Sapphira thought the portion they kept was theirs and they had a right to keep it.

I love watching Dancing with the Stars.  I've noticed in the last 10 seasons or so, a new phrase has become quite common.

"We left it all on the dance floor."

I've thought a lot about this comment and wondered what it is they are really saying.  I think it's their way of saying they gave it their all and didn't hold anything back.

I think we are to do the same.

We are told to lay aside ALL malice, and ALL guile, and hypocrisies, and envies, and ALL evil speakings (see 1 Peter 2:1).

Our supplications, prayers, intercessions and giving of thanks [should] be made for ALL men (see 1 Timothy 2:1).

And we are promised the Lord will do the same.

"to the souls of ALL those who partake" (see Sacrament Prayers)

It's a beautiful concept.  If we give our Father ALL that we have, He will do the same.

Because Ananias and Sapphira weren't willing to give their all, they lost it all including their lives.

Satan somehow convinced Ananias and Sapphira that their scheme would work.  Most likely because they thought they could trick Peter into believing that they were giving him all the proceeds from their sale.  But Peter points out that Ananias wasn't lying to Peter, he was lying to God.

I think it's easy to forget that we can't hide our actions from the Lord.

Adam and Eve tried to hide in the Garden of Eden.

The man hid his talent in the ground.
Ziba Peterson was reprimanded for trying to hide his sins (see D&C 58:60).

Ananias and Sapphira were exposed immediately for the fraud they had committed.  Fortunately for us, we aren't struck dead every time we lie (or else this earth would uninhabited) however, President Gordon B. Hinckley warns:

In our time those found in dishonesty do not die as did Ananias and Sapphira, but something within them dies.  Conscience chokes, character withers, self-respect vanishes, integrity dies (see An Honest Man--God's Noblest Work).

I can't help but wonder what would be worse.  A quick, sudden physical death or a slow spiritual death?

I think I'm going to go with the first one. 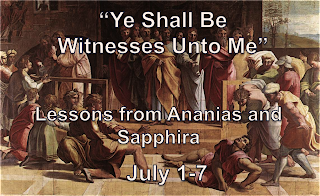 All images are from ChurchofJesusChrist.org unless otherwise sourced.