Thou Art the Christ: World Religions' Views of Jesus Christ

"Thou art the Christ, the Son of the living God."

As I pondered how I would answer that question, I started to wonder, what do other religions think of Jesus Christ?

Here's a brief summary of what I learned:


Founded at the start of the 7th century by Muhammed.

Respect and revere Jesus as a prophet and apostle of God.

Believe Jesus performed miracles including bring the dead back to life.

Believe that Jesus ascended into heaven and will come again.

Deny that Jesus was crucified or died on the cross.  (Some believe Judas Iscariot was mistaken for Jesus on the cross.)

Believe Jesus' death was an illusion.

Deny Jesus was born of a virgin.

Respected and revered as a popular teacher in the first and second centuries after Christ.

Ancient Jews acknowledged He had supernatural powers but deny they came from God.  Often claim He wielded the power of the Devil.

Believe that Jesus was crucified and died on the cross.

Deny that Jesus was resurrected.  Believe that the gardener removed Jesus' body.

Began in 12th to 6th centuries BC.  No single founder.  Hold a variety of views.

Seen as a "Hindu Saint" one whose behavior matched his teaching.

Seen as a god, among many gods and goddesses.

Seen as a symbol of what humans strive to attain, dharma or self-realization.

Some deny he was a true historical person.

Founded in the 5th century BC based on the teachings of Siddhartha Gautama known as Buddha. Hold a variety of views.

Respected as one who had compassion on those in spiritual need.

Seen as one who possessed the correct perspective on life.

Deny He is divine.

Founded in 30 AD traditionally by Jesus Christ with Peter as the sole successor.  Became the Roman Empire's state religion in 380 AD under Emperor Theodosius I.

Believe that Jesus atoned for our sins by dying on the cross.

Believe that Jesus was resurrected.

Believe that Jesus will come again to judge the living and the dead.

THE CHURCH OF JESUS CHRIST OF LATTER-DAY SAINTS

Founded in 1830 by Joseph Smith.  It is a restoration of the gospel taught by Jesus Christ.

Believe Jesus is the literal Son of God the Father.

Believe Jesus performed miracles including raising people from the dead.

Believe that Jesus was died on the cross and was resurrected three days later.

Believe that Jesus' atonement was multiple events including suffering in Gethsemane, crucifixion on the cross, and resurrection from the tomb.

Believe that Jesus will come again and rule as King of Kings and reign as Lord of Lords.

Believe that all will stand to be judged of Him according to our works and the desires of our hearts.

I realize I didn't get all the religions, and I barely skimmed the surface of the ones I did.    But I found it helpful to see where each religion agrees and where they differ. It helps me realize that in the end it doesn't really matter what each religion thinks of Christ, what matters is what WE individually think of Christ.  Our own personal testimony of the Savior is what will change us.

In the October 2004 General Conference, apostle Elder M. Russell Ballard gave a talk titled "Pure Testimony."  It would be a good one to read yourself, but I'd like to highlight a few points that he makes.

I think it's easy to live like we have a testimony when we really are just going through the motions.  We can go to church, perform our duties, give our prayers and talks, and do anything we are asked to do but deep down inside not believe it.

Elder Ballard says that if we have a real testimony it will change what we think, what we do, what we say, and the choices we make.  We will experience a mighty change in our hearts.

2. Our testimonies need to be more centered on the Savior.

It isn't about what we are thankful for or what we love, it's about what we KNOW concerning the Savior, the doctrines of the gospel, the blessings of the Restoration and the teachings of the scriptures.


3. Our testimony should focus on three basic truths.


1. God is our Father and Jesus is the Christ.
2. The plan of salvation is centered on the Savior's Atonement.
3. Joseph Smith restored the fulness of the gospel of Jesus Christ.

Studying the life of Christ with the new Come Follow Me Individual Study program has caused me to think about Jesus Christ more in 3 months than I probably have in the past few years.  I realize I have sort of just taken for granted that I believe in Jesus Christ as my Savior.  Okay, great.  Next?  But gaining a deep and real testimony of Jesus should be a constant quest.

If I were to be asked today, "Whom Say Ye That I Am?"  I know how I would answer.  My hope is that moving forward, my answer will change as my testimony of Christ continues to deepen and change my heart.

To coincide with the April 1-14 Come Follow Me lesson "Thou Art the Christ." 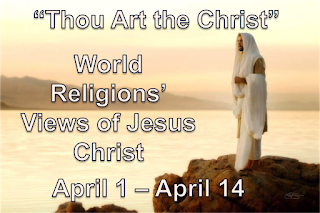