"How can a man be born when he is old?": Nicodemus' Story

February 07, 2019
Nicodemus peers out his front door to see if the sun is below the hills of Jerusalem.  The sky is still an orange glow.  He rubs his forehead.  He must wait a little while longer.  He smiles as he watches his wife stack the dishes.  She had worked hard preparing the lamb and bitter herbs for their seder. It had been a lovely Passover.  She can now rest; the feast is over.

The room finally begins to darken.  He reaches for his shawl.  He carefully wraps it around his head.  He must not be seen.

"Are you leaving this time of night?" his wife asks.

"I am afraid I must.  I am meeting with someone," he answers.

"I do not think you should be safe alone in the dark."

He shrugs.  "The moon is still quite full, the light will be sufficient."  But hopefully not too sufficient.
He gives his wife a quick kiss on her forehead.  "I will be home before you notice my absence."

She laughs, "I will know the instant you are gone."

He walks down the road looking behind his shoulder every few steps.  As each person passes by, he tugs more tightly to the fabric on his head.  He must not be recognized.

That will not be easy, for he is a member of the 71-member grand council known as the Sanhedrin that oversees Judea.  While their jurisdiction does not extend to Galilee and other outlying areas, they are respected and considered to be the last authority in the Jewish world.  Recently the council agreed to be openly hostile to the disruptive man who wreaked havoc at the temple just before Passover.  He yelled, overturned tables, and let animals go free.  He talked nonsense saying that if they tore down Herod's temple, he would be able to build it just three days later.  Imagine!  Rebuilding a temple that took 46 years to build?  Surely this man is possessed.

Or a messenger from God, thinks Nicodemus.  He is determined to talk to this man from Galilee.

Nicodemus turns a corner and sees him.  Thankfully he is all alone, looking up at the sky.  Quietly he approaches.  Jesus turns around and smiles at Nicodemus.  He gestures for him to join him.  Together they look up at the stars in the sky. 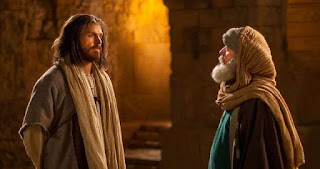 Jesus looks down at him and grins.  Nicodemus has called him the same name that others call Nicodemus.  As a respected leader, he too respects this Galilean who performs miracles.

"Rabbi, we know that thou art a teacher come from God: for no man can do these miracles that thou doest, except God be with him."

"Verily, verily, I say unto thee," begins Jesus.  Nicodemus is surprised that this man would speak with such authority.  Verily, verily is reserved for those speaking a deep truth.  "Except a man be born again," continues Jesus, "he cannot see the kingdom of God."

Nicodemus decides to use a line of questioning common among his fellow rabbis. Known as rabbinic dialog, he will press for the answer by first eliminating the obvious wrong answer.  "How can a man be born when he is old?  can he enter the second time into his mother's womb, and be born?"

Nicodemus is familiar with the ritual of being purified with water.  As a respected Pharisee, he obeys the laws perfectly. He is cleansed before entering the temple and if he touches anything unclean. But what does he mean by being born of the Spirit?

"Marvel not that I said unto thee, Ye must be born again."

Suddenly a gust of wind rushes past them.  A tree branch slaps against a stone wall.   Jesus continues, "The wind bloweth where it listeth, and thou hearest the sound thereof, but canst not tell whence it cometh, and whither it goeth: so is every one that is born of the Spirit."

Born of the Spirit?  Is he talking about changing me from within? Jesus's words ARE like the wind.  He cannot understand them fully, but he knows this man is of God.

He crinkles his brow and asks, "How can these things be?"

What Jesus says next would haunt Nicodemus for weeks and months, "Art thou a master of Israel, and knowest not these things?"  Nicodemus is supposed to be an expert on the law.  He is responsible to preserve it, interpret it, teach it, and ensure that it is obeyed correctly.  He even has the power to arrest anyone caught breaking the law and can judge what their sentence should be.  Unlike those pretentious Sadducees, he does believe in the resurrection.  Why can't he understand the meaning behind baptism?

The moon shines brighter as more torches are extinguished.  People are retiring to their beds.  Jesus and Nicodemus continue to visit.  Jesus explains to him that Nicodemus will be saved, not by his own efforts, but by believing in the Son of God.  If he does, he will not perish but live with God forever.

Jesus ends by saying, "But he that doeth truth cometh to the light, that his deeds may be made manifest, that they are wrought in God."


As he sits in darkness, hiding so that he will not be seen, he knows he does not want his deeds to be manifested.  If he is caught defying the wishes of his own council he will lose everything.

After Nicodemus leaves Jesus, he walks down the stone path towards his home.  He is lost in thought and doesn't notice that his shawl has fallen down around his shoulders exposing his face.  He has much to tell his wife.  Chances are he won't be sleeping much tonight.

*******************************
This is a fictionalized version of the events in John 3:1-21.  Nicodemus would later stand up against those in the Sanhedrin plotting against Christ declaring that a man cannot be judged until he has been heard. [See John 7:50-51] After Christ's crucifixion, Nicodemus would help bury the Savior's body by providing aloe and myrrh in such large quantities that Pope Benedict XVI would describe it as a burial fit for royalty.  [See John 19:39]

To learn more about Nicodemus, here are the following sources I used to write this story: 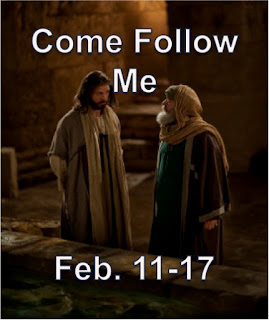