11 Insights into the Lord's Prayer

February 28, 2019
When Christ is giving his Sermon on the Mount, he teaches the people how they should pray by giving what is known as the Lord's Prayer.

Here are 11 insights I've gained as I've studied this prayer this week.

Today when I hear the word vain I think of someone admiring themselves lovingly in a mirror.  But in the Webster 1828 dictionary the first of nine definitions for this word is this:


Empty; worthless; having no substance, value or importance.1


It's not so much that we shouldn't repeat ourselves when we pray, but that we shouldn't have empty or hollow phrases in our prayers.  What if every time we prayed before a trip we asked for safety and protection?  Or if in every prayer before a meal we ask for the food to strengthen and nourish us?  Are those vain repetitions?  I would say not if we mean them.

Insight #1 - We should worry about our sincerity not how often we repeat ourselves when we pray.

"For your Father knoweth what things ye have need of" - Matt 6:8

During Christ's time, the Graeco-Roman cultural belief was that the gods did not always want what was best for mankind.2  Consequently, it was not uncommon to use manipulation techniques to trick the gods into giving you what you want.  Even the Jews during the Second Temple period observed strict obedience to the laws of sacrifice and prayers believing this was going to help them "earn" blessings.

Christ is teaching us that Heavenly Father is aware of our needs.  We can simply pray to Him with faith.  No grand outward gestures required.

Insight #2 - Heavenly Father really does have our best interests at heart.  We don't need to use bargaining, negotiating, or other techniques to convince Him to bless us.

Is Christ telling us that when we pray we need to repeat this prayer word for word?  Notice he says "ye" and not "you" in this commandment.  Ye is the plural form of you.  In essence Jesus is giving us a template to follow.  It is not necessary for us to recite the Lord's Prayer when we pray.

Insight #3 - We can personalize our prayers specific to our own needs and how we typically phrase our words.

Tradition is that Jesus gave this sermon in the Aramaic language.3  This means that when He said "father" he actually said "abba."  While unusual, using the intimate name for Father would not have been unheard of.4

According to sources such as Dead Sea Scroll literature, apocryphal and apocalyptic literature, and the Mishna and Targumim, the Jewish prayers addressed God as LORD, LORD God, Lord of the Universe, etc.  Jews commonly used the words adonai (Hebrew), mar (Aramaic), and kyrios (Greek) all meaning the word Lord.

Abba is usually translated to mean something more personal like Dad or Daddy.5 But it was used formally as well.  The Aramaic phrase, abba mari, meant "father my lord."4

So what was Jesus trying to teach by using the word "abba" instead of "mar?"

Here's what I think.  In the Old Testament, God is represented as the Father to all of Israel.  They are called the children of Israel as a collective whole.6 Christ is trying to teach them that God is not just the Father of the everyone collectively; He is the Father to everyone individually.  Everyone has a child-father relationship with God.

Insight #4 - We are literally Heavenly Father's child.  We can develop a personal and individual relationship with Him through prayer.

The usage of the word "Lord" was not reserved just for God.  The Jews also used it to refer to rabbis, judges, and kings.4 His name is distinguished as being hallowed or holy.  The Kaddish (Jewish prayer) says "yitkadash shemeh rabbah" which means sanctified be His great name. First his name signifies his majesty and then holiness is recognized as his essential attribute.7

Insight #5 - We show our reverence for our Father by how we use His name.

As I've studied this phrase most seem to interpret it to mean that we are to pray for the Second Coming.  But I'm wondering if there is more to it than that.

First of all, let's look at the word "kingdom."  I found lots of definitions but it pretty much boils down to a place that is governed by a king, in this case God.8  The idea that our Father is our King is not a new concept.  Rabbinical Judaism believes that God became King at Sinai when they received His commandments and they agreed to obey them.4 In the Old Testament we are told that God will establish a kingdom that will wipe out all other kingdoms and last forever. (Dan. 2:44)7

When the Pharisees ask when the kingdom is coming, Jesus tells them it is within them. (Luke 17:21)2 Other translations says that Christ said "the kingdom of God is in your midst."9 We know that Christ is our King and His will and the Father's will is the same.

Elder Kevin W. Pearson explains it this way, "Prayer is not a negotiation process.  It is an alignment process... It is about seeking His will and asking for His help to do what we need to do."10

Insight #6 - We should pray for the coming of Christ, that He changes our hearts so that our will matches the Father's.

Just like today, anciently those in the Middle East would usually place their food inside of bread.  The the term "leh'em" or "bread" meant food in general.7 Food is an immediate need, not one we look to in the future.  It is a need that never goes away but is ongoing.  I see this petition as acknowledging that we are continually dependent upon the Lord—always and forever.

As members of the Church of Jesus Christ of Latter-day Saints we partake of the Sacrament including a piece of bread representing the body of Christ.  By doing so, we are promised that His Spirit will be with always.11

Insight #8 - How we treat others will help us draw closer to Christ.

Oh boy, are there are lot of debate and theories out there as to what this really means.  Many scholars can't reconcile the fact that God would lead us into temptation.  That's because He doesn't.

Fortunately we have some help here with this verse.  The Joseph Smith translation says it is this:

"And suffer us not to be led into temptation, but deliver us from evil."12

The aramaic word that Jesus uses for temptation also means trial or test.4 When the children of Israel were receiving their daily manna while wandering in the wilderness, they were told that this was a test to see if they could obey and rely on the Lord.  When they failed, the manna was not edible (Exodus 16:20).

While God does not tempt us to do evil, he does allow us to be tried, tested and tempted.  It's how we grow.  So what is Christ asking?  That we pray that God won't do that to us?  Are we really supposed to pray away our temptations, trials, and tests?  That seems to go against what we just prayed for, that the Lord's will be done here on earth.

I think we need to remember that this prayer also includes, "but deliver us from evil."  I think about the people of Limhi and the people of Alma in the book of Mosiah.  Both were tried and tested. Both groups prayed for relief.  Both groups stayed in bondage.  Both groups were strengthened and eventually freed.

I don't think what Christ is asking us to do is to pray away our tribulations.  I think what we are being asked to pray for is to have our hearts changed so that when these things comes, they aren't a temptation for us.  After the people heard King Benjamin's sermon, they said that the Spirit of the Lord had changed their hearts and

"...we have no more disposition to do evil, but to do good continually." Mosiah 5:2

Elder N. Eldon Tanner said, "Keeping the commandments and following the teachings of Jesus Christ will give us the strength to resist temptation..."13

Insight #9 - We pray for our hearts to be changed so that we aren't tempted to do evil.

Before we came to earth, we participated in a Grand Council where Heavenly Father presented His plan for us to continue towards progression.  We would come to an earth prepared for us and would forget our heavenly home.  We would be able to choose good or evil.  We learned that we would have trials and other pains, but they would be for our good.  We also learned that we would sin but a Savior would be provided for us so we could overcome our sins as long as placed our faith in Him, obeyed His word, and followed His example.

Satan presented an alternative where no one would be lost but he himself would get all the power and the glory.  One-third of Heavenly Father's children supported this idea and were cast out of heaven as a result, never to gain a body. 14

I see this final phrase Christ's way of reminding us that we chose this plan, and that we have a Savior who will ultimately help us progress and bring us back home.  No matter what we go through, what temptations, trials, pains, sicknesses, disappointments, tests we face, Heavenly Father is in charge of the plan and knows the beginning from the end.  To Him goes all the power and the glory, for it is His kingdom.

Insight #10 - We pray to remind ourselves that we chose this plan and Heavenly Father wants us back home.

Does the word "amen" ever become a vain repetition for you?  Do you know the meaning behind this word?  It means "truly" or "verily."  When we end with the word amen we are essentially saying, "This is my solemn declaration."  When we are listening to someone else's prayer, we should say an audible "amen" after the prayer when we concur and also give a solemn declaration.11

Insight #11 - We are offering a solemn declaration when we pray to our Father. 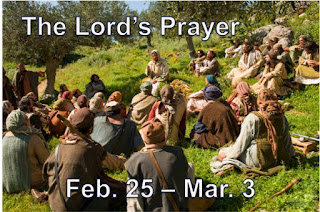