The Parable of the Talents: 4 Lessons from the Man with One Talent

October 08, 2018
Towards the end of His life, Jesus Christ climbed the Mount of Olives with His disciples.  They asked Him what would be signs of His second coming.  His answer is found in Matthew 24, 25, Mark 13, and Luke 21.  This is known as the Olivet Discourse.

During this discourse He teaches using a parable of three men and their master.  The master is leaving for a long time and gives each man a different amount of talents.  The first man doubles his talents from 5 to 10, the second from 2 to 4, and the last man, who received one talent, buries it in the earth.

Before I explain what happens next, I want to first explain what a talent was.  Often this parable is used to teach that we should share our talents and blessings with others so they will grow and expand.  I agree with this analogy.  That's the beauty of parables, they have the ability to teach in layers revealing different principles.

But I want to focus on what it meant in the New Testament, money.

For an explanation of how talents were calculated back then, click here.

A talent was a large sum of money, the equivalent of 6000 days of labor.

Here is that verse using the 2018 federal minimum wage in the United States, assuming someone worked 6000 eight-hour days making $7.25 an hour. 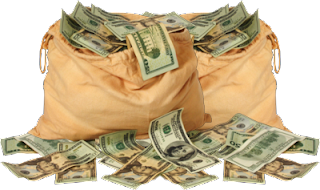 This helps put it into perspective doesn't it?  The first man would have had to have worked 82 years to earn that income, the second man 32 years, and the third man 16 years.

On to the rest of the story.

The master returns from his long journey (note that he comes back a second time) and asks for a reckoning of what they did with their money.  When he learns what the first two have done, he responds exactly the same.

Well done, thou good and faithful servant: thou hast been faithful over a few things, I will make thee ruler over many things: enter thou into the joy of thy lord (Matthew 25:21).

I want to point out the master calls $3.4 million a "few things."  Makes me wonder just how much is "many things."

Now it's time for the man with just one talent to account for what he did with his money.

He first starts by talking about the lord.  He accuses him of being a hard man and of being a thief by saying he harvests crops that he did not plant.  He then says that he was afraid and hid his money in the earth.

I take this to mean that he is afraid that the lord (or others) would steal his money so he hid it.

The master then responds negatively by saying that he has been a wicked and slothful servant.  He says he would have been better off putting the money in a bank (exchangers) where at least he could have received the interest (usury) from the money.

Note: Some scholars claim that putting money in a bank and collecting interest was illegal according to Jewish tradition.  The LDS Bible Dictionary says that usury has more than one meaning and that Jesus gives some credence to interest charges in this parable.  For more information, click here.

The man's money is then given to the one who started with 10 talents bringing his total to $3,828,000 in today's dollars.

As I ponder this parable and think about the actions of the man with one talent, I discover many lessons to be learned.  Here are four:

Lesson #1- Recognize where our gifts come from and share them.

The men received their money as a gift.  They did not earn it.  Yet the third man acts like it is his property and is afraid that it will be stolen.  Clearly the first two didn't seem to share this same concern.

This causes me to ask, how exactly did the first two double their money?  Did they put it in a bank?  Did they play the stock market?  (Wait, was there a stock market in biblical times? Not now, Heather, focus!) Did they invest in businesses?

I have no idea what they did to double their money.  But if they recognized that this money indeed wasn't their own, I have one idea as to what they might have done.

Arthur C. Brooks best-selling author, respected scholar, and president of the American Enterprise Institute, spoke at BYU on February 24, 2009.  I was lucky enough to be in the audience that day.  I'll never forget what he taught us.

It doesn't seem like it would be true, right?  But he gave us studies and stats that supported his claim.  Charitable giving increases a family's purchase power.  Now it might be easy to think that the tail is wagging the dog.  Maybe it was because the purchase power went up that charitable giving went up.  But no, he found the opposite to be true.

Here's one statistic.  In the United States when private charitable donations go up just 1 percent, which is about $2 billion a year, we see 39 billion new dollars in our gross domestic product.

While we know the third man didn't give any of his money to charity, I feel pretty comfortable in guessing that the first two gave some of theirs to the poor.

And if they did, why?  Maybe it was because they didn't see this money as their own but as something to share.

When the third man is asked to account for the money he had been given, his first response is to blame his lord.  First he says, "I knew thee that thou art an hard man."  He then accuses him of raiding other people' crops.

Isn't it easy to do this?  The answer is, yes, very easy.

Dr. Susan Krauss Whitbourne, author of The Search for Fulfillment and a Professor Emerita of Psychological and Brain Sciences at the University of Massachusetts Amherst, said that the study of blame is the study of attributions.  Some people are always quick to blame someone else when things go wrong, while others are quick to always blame themselves as being foolish or inept.  And others will blame fate or a higher power for their troubles.

This is known as a fundamental attribution error.  According to Dr. Whitbourne, we do this for five reasons.

1. Blame is an excellent defense mechanism.
2. Blame is a tool to use when in attack mode.
3. We're not good at figuring out the cause of behaviors, including our own.
4. It's easier to blame than accept responsibility.
5. People lie.

When we learn to let go of blaming as an attribution error, we will feel free and powerful.  Nancy Colier, a psychotherapist and interfaith minister, gives these tips to help us stop:

If I couldn't blame in this situation, what would I have to feel?
What about that feeling is hard to feel?
4.  Honor yourself for making the commitment and doing the work.
5. Be gentle with yourself.

Lesson #3 - Let faith, not fear, be our motivation.

Why did the third man bury his money in the ground?  Because he was afraid.  This action reminds me of the people Lehi saw in his dream.

There was a group of people who

did press forward through the mist of darkness, CLINGING to the rod of iron... (1 Nephi 8:24 emphasis added).


Would you rather have someone hold your hand or cling to your hand?  When I read the word clinging, I imagine a group of people gripping the rod of iron in fear.  What would they be afraid of?  Losing the path?  Falling away?

Turns out that's exactly what happens.

And after they had tasted of the fruit they were ashamed, because of those that were scoffing at them; and they fell away into forbidden paths and were lost (1 Nephi 8:28).

When we fear something, we run of the risk of it actually happening.  But when we act in faith not fear, we will see better results.

The Apostle Paul tells us,

For God hath not given us the spirit of fear; but of power, and of love, and of sound mind (Timothy 1:7).

The reason why we don't need to fear is because of Jesus Christ.

The man with one talent was afraid of losing his money and in the end that's exactly what happened.  We can change our outcome by letting go of our fears.

Lesson #4 - Remember our attitude matters more than our results.


This is something I have wondered.  What if the third man had no money because he had lost it while helping others?  Or what if he didn't have any money because he was anxiously engaged in a good cause and someone had taken it?

I don't think the master was as interested in the amount of money each person had but more what they had done with the money.

President Oaks from the First Presidency said in October 2000, "...the Final Judgment is not just an evaluation of a sum total of good and evil acts--what we have done.  It is an acknowledgment of the final effect of our acts and thoughts--what we have become."[emphasis added]

As humans, we tend to get caught up in results and measurables.  We want to know how we are doing.  Are we ahead?  Are we behind?  Are we on track?

The third man in this parable was worried about the end result not what he could do with the money.  That is why I think the master called him a wicked and slothful servant.  It was because of his attitude not because of the amount of money he had in the end.

The good news is we don't need a measuring stick to discover where we stand with the Lord.  We can pray to the Father and find out for ourselves whether our offering is acceptable.

As I think about this parable that Christ taught concerning when He will come again to earth, I'm grateful for the third man who buried his talent.  He serves as a warning of what we should avoid in anticipation of the Second Coming.

Here are the lessons again:

1. Recognize where our gifts come from and share them.
2. Own up to our actions.
3. Let faith, not fear, be our motivation.
4. Remember our attitudes matter more than our results. 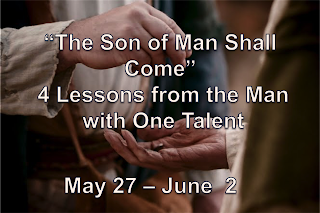