Organizing My Spice Cabinet in the Real World


I decided to organize my spice cabinet today.  It has been a mess for quite some time.  When we moved back from NYC, I had lots of doubles.  In addition, my daughter had left behind a few of her spices as well.  Everything was getting tucked into this cabinet--never to be seen or used again.

Things I hardly ever use were on the bottom shelf, things I use often were on the very top shelf.  It was a mess!

The first thing I did was gather everything and put it on the kitchen counter.  Then I cleaned the shelves and put a new liner on each one. 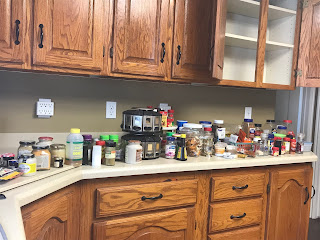 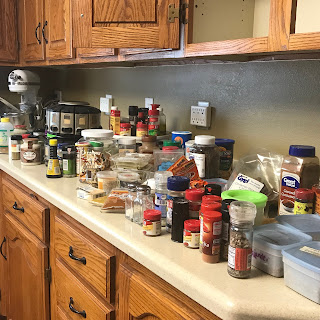 With everything out, I realized I didn't have a plan.  I didn't know what to do!  So I decided to take a break and look on the Internet for tips on organizing spices.  That turned out to be not helpful at all.  It seemed like the ideas out there were more about creating a cute, Pinterest-worthy pantry, not something that would actually be functional.


The Internet had failed me.  I realized I was on my own.  I started to think about all of my spices and realized a few things.

2. Spices do expire.  I threw out anything that no longer smelled good. When I buy spices, I need to buy the smallest container available.  I don't run a restaurant, buying in bulk is wasting the spice and taking up too much space.

3. I need to stop buying spices whenever I go to France.  I have plenty from previous trips.

4. I regularly use what I buy in New Mexico.   I also realized I need to go to New Mexico more often.

5. I need to consolidate containers. I had lots of multiples.

6. Spices in bags don't get used.  If they are in tubs, they are more likely to get used.

After I addressed my realizations, I decided to take a bottom-to-top approach.  My frequently used stuff needs be on the lowest shelf.  As I move up, the items should be used less often.

Here's what ended up on my bottom shelf:

I've had this spice carousel for years and I love it.  I cleaned it up as best as I could.  I refilled the ones that needed it and made a list of what I needed to buy.  The basket has packets of Goya seasoning.  I don't know what it is exactly because it's in Spanish, but I love it.


I've also had this lazy susan for years.  I decided to put all my salts, peppers, and seasoning mixes on the top shelf.
On the bottom are spices that I use but don't have room in the carousel for.  I put my New Mexico chili powder in a small container because it was in bags.  The Herbes de Provenance is in the plastic tub, and the green chile powder is on top of it.  I probably use these three things more than just about anything else, besides salt.

I labeled as much as I could so that things will go back where they belong.  I'm now thinking I should have labeled the tub with the Herbes de Provenance.  Only I know will know what's in there. 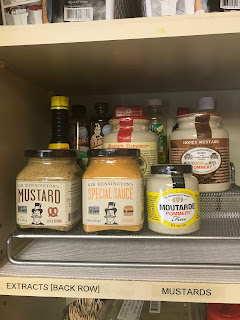 On the next shelf, I put in the staggered shelf that had been in the pantry.  I put the extracts (which I rarely use) on the back row.  Then I put all my French mustards where I could see them.  I decided to label the shelf so that I'd know the extracts are back there. 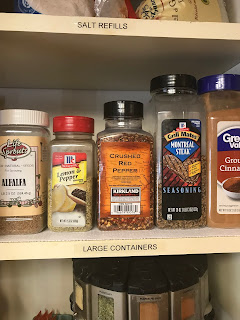 Next to the mustards I put the large containers.  I grow my own alfalfa sprouts, so I feel good about that being next to the spices.  I also go through a lot of cinnamon when I make cinnamon rolls, so I feel fine having it where it is too.  The others are used for grilling and marinades.  It feels kind of random to have these here, but they are all pretty much the same size, so I'll see how this works.  Nothing is behind these containers.  It's empty space back there. 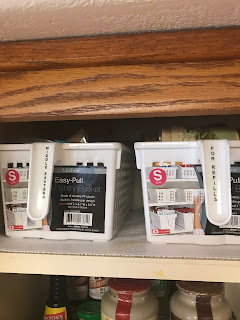 I remembered I still had these baskets left over from NYC.  I really like them because they have a handle that makes it easy to pull it down.  The basket on the left has tons of spices that I have bought in France.  I bought most of them at a Pakistani market, so I decided to name them Middle Eastern.  I'm sure this isn't geographically correct, but it makes sense to my brain.

The basket on the right holds spices that I can use to refill what is on the bottom shelf.  It has tumeric, ginger, Herbes de Provenance (I seriously have way too much of that stuff) and other items that I can put in the carousel when it runs out. 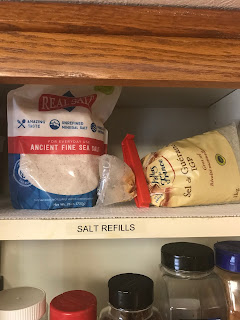 I decided to put my salt refills on the top right side of the shelf.  I had the room and it's something I don't use very often.


I decided to put what I use around Christmas time in the pantry.  I like to simmer mulling spices to make my house smell good.  These are the things that I use. 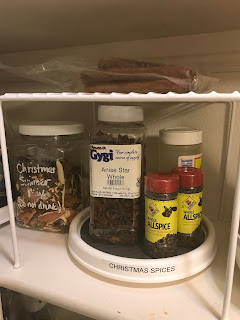 On Christmas morning I make an English breakfast.  I make homemade crumpets with clotted cream.  Whenever I come across different jams and honeys, I like to use them too.  Now I have them all in one place and know right where to go to get what I need. 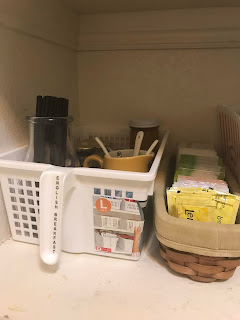 Remember that pile of decorating supplies?

Here's all the contents that were hidden in there.

After throwing out what was old, I got it all organized.


I decided the bucket wasn't working, so I grabbed a basket and put them in there. 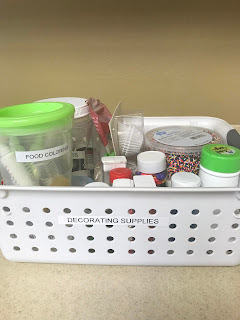 I wonder if this will make me more likely to use the decorating supplies.  I doubt it.  This might all get tossed someday. 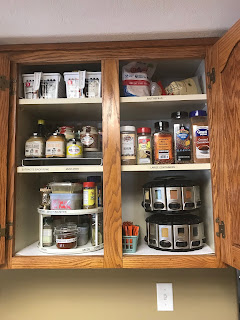 Here's my newly organized spice cabinet.  Too bad my kitchen is still under construction, because I'm now in the mood to cook something.

In case you are wondering, this is the label maker that I use.  I seriously love this thing. 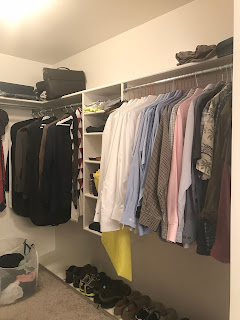 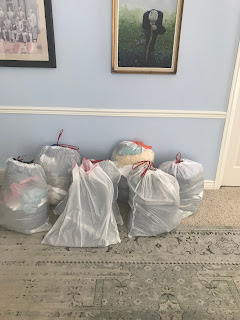