A Single Name: The Story of Johnny's Education

May 30, 2018
Today my youngest son, Johnny is graduating from high school.  Someone will read his name "Johnathan Bradford Pack", he'll walk across the stage, we will all cheer, and he'll go back and sit down.

His story might seem like the other 650 names that will also be read today.  But nothing about Johnny's education has been simple.  Here's the story of one of those names on today's high school graduation program.

When Johnny was little, I knew something wasn't quite right.


He didn't babble like other babies, he just stayed quiet.  When he finally started talking, around the age of two, he could only say two things:

"Ginger" which was the name of our dog.  He said that word about anything that was not human.  Bug, cats, horses, dogs, birds, mice, everything was a Ginger.

Having had four other kids, I knew this wasn't normal.  I was right.  He was diagnosed as language delayed.  He was two and half years old but functioned like a 19-month old.

We started intervention right away with Kids on the Move.  It took three months for him to say his first word that actually meant something.  "Milk"

After two preschools, two years of therapy, and four speech therapists, my son was finally ready to start kindergarten.


The lowest reading group was A.  Johnny stayed at that level all year.  If there had been a lower reading group, he would have been in that level.  The teacher and I finally sat down with Johnny and asked him how he felt about reading.  He said, "I don't see why I have to read.  My brothers and sisters can do it for me."  Okay, fair point.  But we were finally able to convince him that reading would be a good thing to learn for himself too.

The elementary school years were difficult for Johnny.  His school had lots of parties and other incentives to get all your homework and assignments done.  I can't think of a single incentive that Johnny ever participated in.  He finally got to the point where he didn't try, because he was more comfortable staying inside with the other "lazy" kids and visiting with them.

Just a side note about Johnny and elementary school.  He was loved by his teachers.  Many of them still ask me how he's doing today.  While he didn't do "well" in the traditional sense, he showed an emotional intelligence that was rarely seen in someone so young.  He had the ability to empathize (not just sympathize) with someone else who was hurting.  He would look for those who were on the outside and just sit with them until they felt included.  Even at 5 years old! If schools could somehow figure out how to grade social and emotional skills, he would have gone to every single one of those parties.

Then it was time for those wonderful, awkward junior high years.


Junior High has never been easy for any of my kids, but everything went from bad to worse for Johnny.  His grades suffered tremendously.  I begged and begged for the school to test him.  They would look at his grades which averaged to a C and said, "Nothing is wrong with him."  I said that he was spending 4 hours a night just to get those C's.  They said that I need to stop comparing him to his other siblings.

I finally was able to get on a 18-month waiting list to have him tested at our local university, BYU.  Between his ninth and tenth grade years we learned he had all sorts of learning issues.  I was finally able to convince the school to do some tests.

He scored way above average in abstract logical thinking and almost at the mental retardation level for phonological processing.  Translation?  He does best when allowed to try to figure out the problem on his own, and not when a teacher tells him what to do.  Not a good fit for high school.

Despite being the only woman and advocate for my son at a meeting with 7 other male teachers and administrators, I was able to convince them to start an IEP (Individualized Education Plan) for my son in 10th grade.  It helped a little bit, but he still struggled.  Also because he was a victim of a crime that I'm not going to talk about.  But let me just say, middle-class suburbia is no safer than New York City.  In fact, we felt way safer when we moved to NYC.

Moving to New York City ended up being the best thing that ever happened to Johnny.  (If you ask him, he won't agree.)


Kayaking on the Hudson River

He also go to "attend" school at home taking online classes.  He could go at his own pace, skip a day if he felt like it, and get individualized attention from his principal (me).  His junior year started in October and ended in March.

At first I left him alone to do his classes.  And then I made a breakthrough discovery.  Even though his reading comprehension was low, if I read out loud to him, he understood every word.  His quizzes went from D's to A's.  I spent many hours in our NYC apartment reading out loud every textbook, quiz and assignment to him.  He averaged about 97%  Then he'd take the final at BYU where they wouldn't read the questions out loud to him.  He averaged 65% on the finals and ended up with B's for his grades.

It was then that I realized that my son didn't have a learning disability, the school system had a teaching disability.

I also started to see that while he was struggling at school, he wasn't struggling at life.  And he was getting a great education outside of the classroom.

He knows how to navigate the European train system:

He can show you around Paris: 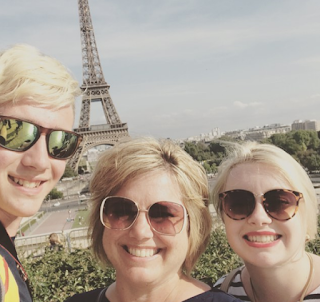 He has interviewed a Holocaust survivor:


He has met a Congressman at the Capitol and was given a 6-hour private tour (not by the Congressman but the smiling man behind him):


He helped build a home in Samoa:


He's been to Germany, Luxembourg, the Netherlands, and Belgium:

He has visited several museums in Boston, Philadelphia and Washington, D.C.:


He has learned both ballroom and Irish dancing:

None of these experiences will show up on his transcript.  But this is what will:

- took an entire year of math in six weeks by waking up at 6:00 a.m. to go to summer school  (He left early so that he could pick up someone he found out was having a hard time getting to school.)
-took several online classes from BYU and Eastshore, which meant scheduling his own finals and studying on his own time
-spent hours working on assignments that didn't make sense to him only to get a barely passing grade
-made honor roll for the first time his last semester of his Senior year

Because he is not officially graduating from Pleasant Grove High today, but technically receiving a diploma from the Alpine School District, Johnny was able to skip four credits which equaled to a semester of classes.  He used that semester to go on three field trips to Boston, Philadelphia and Washington D.C.  I never met anyone that can spout off facts about American History like this kid can.  Missing those 4 credits was definitely worth it.

Today someone is going to stand up and read "Johnathan Bradford Pack" a single name on a long list of high school graduates.

But he is not a single name to me.