Toolulah and the Millionaire Soldier in Afghanistan

January 22, 2018
Toolulah got a letter from a soldier in Afghanistan.

Meet Sgt. Rosine Smith.  She's fighting for our freedom... or trying to take all my money.  One of those two.  My thoughts within her emails are in all caps.

Nice to meet you , I am Sgt. Rosine Smith from the South Eastern State of the United State (Kentucky) THAT IS DEFINITELY WHAT WE CALL KENTUCKY, THE SOUTH EASTERN STATE based in Kabul Afghanistan, I hope all is well with you? CONSIDERING I'M NOT IN KABUL AFGHANISTAN, I'D SAY I'M DOING PRETTY WELL I am working with the United States Air Force peace keeping troop in Afghanistan, on war against terrorism. I need your help. OF COURSE, THAT MAKES SENSE THAT THE USAF WOULD ASK RANDOM CITIZENS TO HELP FIGHT THE WAR ON TERRORISM.

I have in my possession the sum of $ 3.5 million dollars (three million five hundred thousand United States dollars) that I made here in Afghanistan. WAIT A MINUTE, JUST HOW MUCH ARE WE PAYING OUR SOLDIERS?

I deposited this money with an agent of the Red Cross. WHAT IS A RED CROSS AGENT?   I want you to remain my beneficiary and receive the fund and keep it safe until I can meet with you. ISN'T THE AGENT KEEPING IT SAFE? I have an urgent need to get this box out of here because they are planning to take some troops out of Afghanistan and I am among them, now I have no choice but to move this box to a safe place, that's why I contacted you and I believe in you .

It will help me to invest in a good profitable company, GOOD PROFITABLE COMPANIES TYPICALLY AREN'T LOOKING FOR INVESTORS, IT'S THE ONES WHO HOPE TO BECOME PROFITABLE WHO LIKE INVESTORS I will give you 20% of the fund for your assistance after you have received the cash. You will send a response kindly WHAT HAPPENS IF I RESPOND MEANLY? if you are willing to work with me to be able to send you the information where the money was deposited, BUT YOU ALREADY TOLD ME THAT THE CASH IS WITH THE RED CROSS your urgent response is needed. Everything I need from you is honest and trustworthy.

Well this seems pretty legit.  A soldier in Afghanistan, who has time to do her hair and makeup each day, has made $3.5 million working with the USAF peace keeping troop. Toolulah is in.

Because, you know, that's a pretty good gig.  Maybe Toolulah should join the army.

Due to the United Nation policy on Afghanistan, there is a plan to move some troops out of Afghanistan... BLAH BLAH BLAH, LET'S GET TO THE GOOD STUFF...

I must not fail to explain to you how I came across this fund I want you to use for investment.  OKAY LAY IT ON ME.  our soldiers had encounter and exchanged bullets with some gunmen YOU TRADED BULLETS WITH SOME GUNMEN?  and eventually three of our soldiers were injured in the event while over sixteen of the gunmen were killed, as a nurse in the army. THE GUNMEN WERE NURSES IN THE ARMY?  YOU PROBABLY SHOULDN'T EXCHANGE BULLETS WITH THEM THEN.

I and my group rushed to give medical attention to our men WAIT, WHY DIDN'T THE NURSES GIVE MEDICAL ATTENTION?  OH YEAH, THEY WERE THE GUNMEN who were injure at the spot where the sixteen gun men were shot to dead, SHOT TO DEAD?  IS IT POSSIBLE TO BE SHOT TO LIVE?  I saw two trunks and showed it to my fellow YOUR FELLOW?  DO YOU HAVE A BOYFRIEND FROM THE 1950'S?  and we decided to force of the trunks open and discovered huge amount of dollars in it  and we did the same to the other trunk and saw the same thing and we quickly took the trunks.  AND THEN YOU SHOT THE FELLOW TO DEAD RIGHT?  IF YOU DIDN'T, YOU BETTER SLEEP WITH ONE EYE OPEN.

Finally, I want you to stand as the beneficiary and receive the fund and keep it safe so that as soon as i come to your country, MY COUNTRY?  ISN'T THE UNITED STATES YOUR COUNTRY TOO? you will assist me to invest it in a good profitable venture,I will give you 20% of the total money for the assistance after you have receive the money. SO AFTER I GET 100% OF THE MONEY FROM THE RED CROSS AGENT, YOU ARE THEN GOING TO GIVE ME 20% OF IT?  NO, I'LL JUST KEEP THE 100%, THANKS.

Where we are now we can only communicate through our military communication facilities, which are secured so no body can monitor our emails, BODIES CAN'T MONITOR EMAILS, BECAUSE YOU KNOW, THEY ARE BODIES then I can explain in details to you. I will only reach you through email, because the control unit monitor all calls, I HATE TO BREAK IT TO YOU BUT EMAILS ARE PRETTY EASY TO MONITOR TOO I just have to be sure whom I am dealing with. OH HONEY, YOU HAVE NO IDEA Please if you can handle it, let me know so that i will furnish you on the way forward.

Okay, so to sum up.  You and another soldier stole $3.5M and gave it to the Red Cross but I am the only one you can trust.  So you are going to give me all of it, I'll tell you where it is, you'll come pick it up and let me keep 20%.

Amazing!  And they were in US dollars in the trunk?
Because exchanging Afghanistan currency in Utah can be tricky.

these are looted funds being moved before our encounter HATE TO BREAK IT TO YOU ROSINE, BUT SOUNDS LIKE YOU WERE THE ONE WHO LOOTED THE FUNDS AFTER THE ENCOUNTER.

Who looted them? Toolulah asks.

hi, we traced and figured out that the trunk was being moved by ISIS members HERE'S A THOUGHT, INSTEAD OF TRACING DOWN THE MONEY, GO GET THE ISIS MEMBERS!

Oh, I don’t want ISIS money. They are bad dudes.

She has a great response.

this money was recovered, RECOVERED?  I DO NOT THINK THAT WORD MEANS WHAT YOU THINKS IT  MEANS so i am the owner of the money as we speak, and i am urgency to move the box THE BOX?  WHAT HAPPENED TO THE OTHER BOX? out of here before my troop gets transferred...

When does your troop get transferred?

the information that cam was the my troop is to move in less than 4 months. the exact time was not stated, thta is the more reason i have to move the box as quick as possible

Rosine must be in a hurry, she doesn't have time to capitalize anymore.

Diplomat?  I thought it was a Red Cross Agent.

Oh let’s not waste time with all of that.
First you need to try to find more boxes.
Seven days goes by and I don't hear from Rosine.  I get worried.

Hello?  Did you die?

She finally starts to get suspicious.

The company have been waiting for my beneficiary, YOU HAVE A COMPANY?  but I have failed to get someone so far WHAT?  NO ONE IS GOING FOR THIS?  I'M SHOCKED! and I am not sure if your serious or playing with me in this issue,  I'M DEFINITELY PLAYING WITH YOU that is the reason. I had to let you to be.. 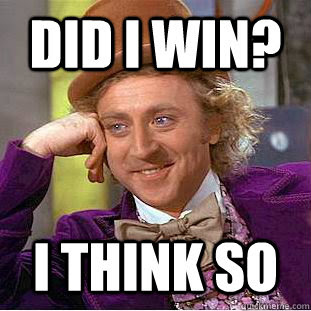