How Our Family Dog Saved My Sister's Life

July 28, 2013
When I was 8 or so, my dad issued me a challenge.  He challenged me to ride our old silver bike all the way around the pool without falling or stopping.  The reward?

A pink Huffy banana seat bike.  Like the one in this picture: 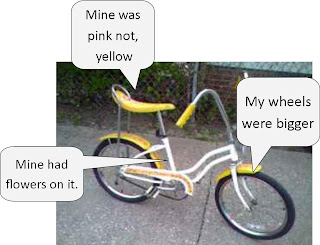 
My dad's thinking was that if I could ride this old rackety silver bike around the pool, then I'd be good enough to ride a brand new bike.

This wasn't the last time my Dad used this thinking.  He did it again later when I was learning to drive our tan VW rabbit. It looked just like this: 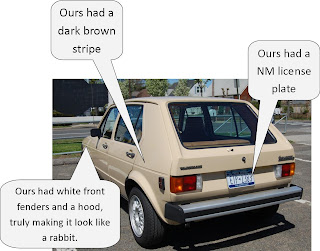 He said that if I could drive the stick shift in the dark, then he'd let me drive the car by myself.

Where would my dad get such a great idea?  From his own dad of course.  My dad learned how to shoot blindfolded.  Now, giving a teenage boy a gun and a blindfold might not seem like a good idea, but it was.  After trying to shoot targets blind, shooting without a blindfold was much easier.  My dad got so good he broke a national record and qualified to try out for the U.S. Olympics.  So yeah, it works.


So here I am, a little eight-year-old driving an old bike around our backyard pool.

Finally, one day I did it.  I rode my bike 1 1/2 times around the pool before I had to stop and put my feet down.  Thankfully my mom, dad, and sister were all there to witness it.

So I got my Huffy banana seat pink bike!  What was the first thing I did when I got my bike?  Rode it around the pool of course.  I promptly fell over, but thankfully my parents and sister weren't there to watch.  So don't tell them.

Someone forgot to tell my sister that she was born 17 months after me.  Whatever I did, she wanted to do to.  So she immediately gets on that old silver bike and starts practicing around the pool.

One night after the sun went down, my parents and I heard our Irish setter, Ponderosa, bark frantically in the backyard.  My dad rushes out and finds my sister upside down in the pool trapped under the bike.  She couldn't free herself from the bike so that she could swim away.  My dad jumped in and rescued her.

What had happened is that she was practicing riding her bike and fell.  Only she fell into the pool with the bike.  The pedal of the bike caught the edge of the deck causing it to suspend my sister underwater.  I hate to think what would have happened if Ponderosa hadn't been there to see it, or if my parents hadn't been there to hear him barking.

So obviously, Dad created a new rule.  Instead of riding the bike around the pool, Kristi had to ride the bike around the driveway.  Sounds easy right?  No, it was much harder.  First of all, our driveway wasn't paved, second of all, it was huge.  But at least she didn't risk drowning when she fell. 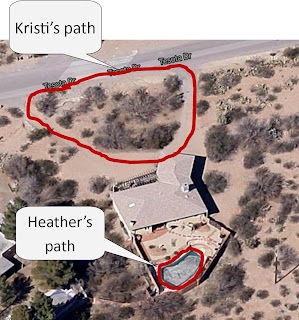 I'm happy to report that my sister was also successful and got a purple Schwinn bike with a basket.  Here we are a few years later with those bikes.

By the way, can anyone see my sister's flip flops? 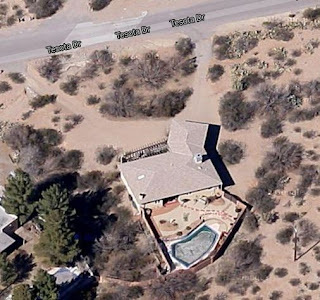