April 05, 2013
I am able to talk to anyone, anytime, anywhere for LONG time.  It drives my kids crazy.  I know, because my dad does it too, and it drives me crazy.  I won't even go to Cabela's with him anymore.  Unless of course they'd let me use one of their sleeping bags and a tent.

When I was a little girl I was convinced that my dad knew everyone on earth.  We'd go to the store, he'd run into someone he knew, and two hours later we'd leave.  I would stand at his legs and whine, "Can we go now?  Please???"  I'd wish that Dad would just talk to his friend later when I wasn't around.  Plus, I was missing my favorite show like Eight is Enough, or Three's Company or being able to watch the gorgeous Gopher.  (Was I the only one who had a crush on him?)

It wasn't until quite a few years later I began to realize that Dad wasn't talking to his friends, he was talking to STRANGERS!  Really?  Strangers?  Why have long conversations with people you've never met?

Then I became an adult and found out.

I usually start talking to someone when we are standing in line.  I mean after all, what else are we going to do?

In 2002,  I took my two older boys to the Winter Olympics where you could play a bunch of the games.  The wait in line was a good hour or more. 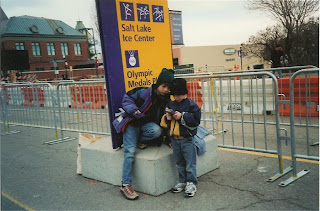 We stood next to a father who had two boys as well.  As we got to know each other and became friends, we figured out that we could do more activities if we tag teamed.   I would wait in line at one sport, and he'd take the four kids to another one.  Then he'd wait in line for another game, while the kids played with me.  Our kids got to do twice as many events and we had a fun day. 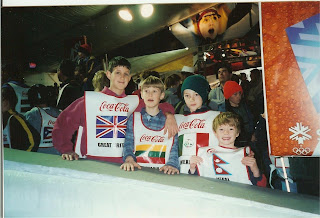 All because I was willing to talk to the stranger in line next to me.

Recently, Dad told me that his dad used to be the same way.  Bob, or Buck as he was known, could talk to anyone.   My Dad would have to wait around just like I did--like my kids do now.  Dad also told me that Buck's dad, John Buchanan was like that too!

So where did this trait come from?  Why do I come from a long line of people willing to talk to strangers?  Recently, I found out.  It truly is in my genes.  My third great grandfather Stanislas Besin was a colporteur.  This means that he peddled religious literature.  He was a recent convert to the Baptist church and went about sharing what he knew with others.

But here's the thing.  He wasn't just shooting the breeze.  He was sharing his beliefs and convictions--and it wasn't easy.  He would get fined and even go to prison for it.  But it never stopped him.  He said that he wasn't looking for trouble, but was willing to take the consequences if he found it.  People said that others were forced to respect him because of his convictions.  Everyone loved him.

So it got me thinking about my own conversations that I have with strangers.  What am I peddling?  Do they walk away from the conversation uplifted and inspired, or are they grateful that they finally managed to get away?  I need to follow Stanislas' example and make sure that what I'm peddling is of value so that I can be respected, not avoided.

The other day I got a call from someone who lives in Greenville, South Carolina.  He knew my son, Christopher, when he served as a missionary there.  He said something that warmed my heart, "Your son can talk to anyone.  He isn't afraid to open his mouth."  Looks like the colporteur gene is alive and well.  The legacy continues!