Giving Feedback: Lessons from an Angel 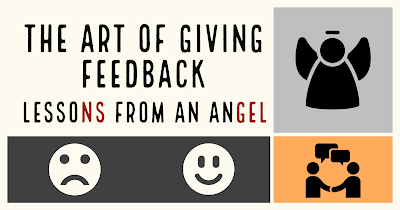 Alma the Younger was visited twice by the same angel as recorded in the Book of Mormon.  I noticed that their interactions teach us a valuable principle that we can use today—the art of giving feedback both negative and positive.

The first interaction was when the angel needed to give Alma negative feedback.  Let's look at the strategy he uses.
Lesson #1 - TALK TO THEM IN PRIVATE WHEN YOU HAVE THEIR ATTENTION
When the angel first appears to Alma he makes quite the entrance. He comes down as if in a cloud, he speaks as if his voice is thunder, and he makes it feel like it's an earthquake.  (Mosiah 27:11).
I don't think that's necessarily what we should do when we need to speak to someone.  We probably would freak them out.  However, this is a powerful example of making sure you have someone alone and have their attention.  The angel didn't show up in front of a bunch of people, just the ones who needed to hear the message.  He chose a place where they wouldn't be distracted by other demands on their attention.
Lesson #2 - ASK QUESTIONS FIRST
It would have been really easy for the angel to begin with something like, "Alma, you little stinker."  But instead he says, "why persecutest thou the church of God?" (Mosiah 27:13) He's acknowledging an observable behavior and wants to know why he's doing it.
This is a great example of seeking to understand and then to be understood.  It's easy to come in with both guns blazing ready to accuse and attack.  But how much more effective would the feedback be if we show that we want to know their story and their motivations behind the action?
Lesson #3 - SHOW CONCERN
The angel next quotes the Lord and reveals that Alma's father and King Mosiah have been praying for them.  He lets them know that there are people who love them and are praying for them.
We can show love and concern even when we have to say something that the other might not want to hear.
Lesson #4 - GIVE FACTS NOT OPINIONS
The angel then tells the men about how the people of Limhi and the people of Alma.  He gives evidence as to the power of God and his ability to make anything happen.
It'd be easy to say to someone, "You are lazy."  But it's better to give observable behavior. "You come into work late by at least 15 minutes on average 4 days a week."  Instead of labeling people, the feedback should be facts not opinions.
Lesson #5 - CREATE AN ACTION PLAN
The angel ends his message by giving  Alma something very specific to do, stop destroying the church. (Mosiah 27:16).
It's easy to be a problem pointer outer.  It's better to be a problem solver.  How often do we tell our co-worker or supervisor our observations as to what is wrong with the policy/system/process/outcome?  But do we offer real actionable solutions?  It isn't about being bossy, it's about strategizing to find the best solution with measurable results.
Lesson #6 - MAKE THE CONSEQUENCES CLEAR
The angel tells Alma that if he doesn't change his ways, he'll be cast off.
Now, we probably shouldn't be going around casting people off just because they have done something wrong.  But I think the angel is showing us that it's good to let people know what the consequences are as a result of the action.  It's not about threatening, it's about informing.  If the payroll clerk keeps messing up on reporting taxes, the company will face heavy fines.

Years later, the same angel appears to Alma again.  This time it's to encourage Alma to keep doing what he's doing even though he might be doubting himself.  Let's look at the different strategy he uses.
LESSON #1 - LET THEM KNOW IT'S GOOD NEWS
Alma was probably already feeling pretty down about himself.  Can you imagine seeing the same angel who had previously reprimanded you.  He might of thought, "Well of course!"  But the angel immediately lets him know that he's not upset.  "...lift up your head and rejoice" (Alma 8:15)

When you want to give someone positive feedback, don't begin by making them think they might be in trouble.  Let them know right away it's a good thing they will hear.
LESSON #2 - GIVE A SPECIFIC COMPLIMENT
The angel then tells Alma exactly why he should rejoice.  He outlines exactly why he should rejoice. "...thou hast been faithful in keeping the commandments of God..." (Alma 8:15)
I think the angel is giving a powerful example here of positive reinforcement.  It can be easy to forget to compliment someone on what they are doing right.  Obviously they know they are doing the right thing because they are doing it.  Right?  Usually, but not always.  I have found that sometimes I will compliment a student on something they did on their paper and they said, "Oh, I didn't realize that was what I was doing when I did."  By giving them the compliment, I taught them an important prinicple to repeat.
I imagine that Alma knew he was keeping the commandments and that he should keep doing it.  But he had just been kicked out of Ammonihah after having had three successful mission areas: Zarahemla, Gideon, and Melek.  He might have been wondering what he was now doing wrong.  The angel was there to let him know he hadn't.
LESSON #3 - CREATE AN ACTION PLAN
After the angel told Alma what he was doing well, he also let him know what needs to happen next.  Alma needed go back to the very place that had kicked him out.  Imagine if this is what the angel had said first.  "Get up and get yourself back to Ammonihah.  Oh and by the way, rejoice, you are faithful."  The message might have been received a little differently.  The angel tell him what to do and how to do it.
LESSON #4 - EXPLAIN THE WHY
I would think that Alma wouldn't have been too excited to return back to Ammonihah, but we read that he returned "speedily to the land of Ammonihah." (Alma 8:18)  Why would he run back to Ammonihah?  I think it was because the angel gave them the reason why he wanted him to return.  He warned them that the people were studying how to destroy freedom of religion.  (Alma 8:7)  Pretty scary stuff.  Enough for Alma to hightail it back.
It's easy to forget this step.  We kind of end up sort of like, "Because I said so." or "Just do it, trust me."  But I have found that when you explain why you are giving the feedback, it will help them in the future to make better decisions.
Here's an example.  Let's say that I ask my friend to purchase 10 pink balloons but I don't tell her why.  She gets to the store and they are out of pink balloons, so she buys 10 light blue balloons instead.  But I needed those balloons for a gender reveal and now the parents are going to think they are having a boy.  If I had said, "Could you pick up 10 pink balloons for a gender reveal?"  Then when she learns the store is out of pink balloons, she'll know she needs to go to a different store.
Giving feedback is definitely an art.  It takes practice, self-awareness, and emotional intelligence.  I'm grateful that the angel who appeared to Alma the Younger gives us two excellent examples to follow.
Come Follow Me 2020 LDS beliefs

YFXhuta6zgD5 said…
Everyone makes errors, however that doesn’t mean you can’t decrease your dangers. Imagine beginning a web-based on line casino project, investing big sums of money, 온라인카지노 getting ready a sophisticated enterprise technique, and hiring a full staff. Imagine obtaining software and video games, creating a correct marketing technique, and, finally, launching the project. It’s not a pleasing feeling, however talking about worst-case eventualities is important find a way to} keep away from them.
December 5, 2022 at 2:07 PM