1. It tells us of the manner and doctrine of Christ
2. It exposes the enemies of Christ.

In Jacob 7, we are introduced to Sherem who is exposed as an anti-Christ. 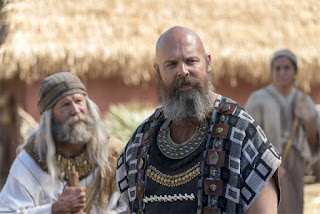 Robert L. Millet has written a scholarly article titled "Sherem the Anti-Christ" where he outlines different characteristics of an anti-Christ.

I thought it would be interesting to look at these characteristics in light of events happening today.  We definitely are surrounded by those who want to us to follow them since they claim to have the actual truth.  One such individual has been in the news quite a bit lately, Chad Daybell.  I've been fascinated with his story and how he got to where he is today.  In studying his life, I've seen many of the same characteristics as Sherem.  I thought it might be helpful to see them side by side.

Note: I am not going to source my information that I've learned about Chad Daybell because I don't want to point the readers to any of his teachings or writings.  My purpose is not to defame Chad but rather to show the possibility of modern-day Sherems in our midst.

TRAITS OF AN ANTI-CHRIST

1. They Deny the Need for Christ.

At first glance, it might seem like Chad Daybell doesn't fit this characteristic.  After all, he definitely has promoted himself as a follower of Christ.  Sherem is very careful how he phrases his words.  He says,

"If there should be a Christ, I would not deny him."

Chad Daybell believes that he once lived on the earth as James the Less, Christ's brother.  He believes that he has unique knowledge because of his visions and dreams.  (And for $5 a month you used to be able to subscribe to a website to find out what they are.)  In essence he has been saying that by buying his books and listening to him we can be saved from the awful destruction that is about to befall us.  But it is Christ who saves.

2. They Use Flattery to Win Disciples

Scholars differ as to whether Sherem was an indigenous person living among the Nephites or a Nephite himself.  As I read his story, I tend to lean towards the idea that he started as an outsider.  But nevertheless, the spoke their language powerfully and skillfully.  He flattered the people.

Chad Daybell has also been able to use his charisma and charm to gather many to listen to his words.  He has been a popular speaker and many have loved him.  Some have even moved in order to live closer to him.

3. They Accuse the Brethren of Teaching False Doctrine

Sherem shows "concern" for Jacob because he claims that Jacob is blasphemous.  That's a pretty strong accusation to lay before a prophet.

I can't find any evidence that Chad has accused the prophet of teaching false doctrine, but I did find an instance where he essentially accuses the prophets of "being asleep" or no longer leading the people.  He claims that it was necessary for President Monson to be silent so that the members of the Church would have to find their own way.  He then said that he knew the way and could show them how to get there (for a monthly fee).

From what I have read, many of Chad's followers believe that the Church is actively deceiving the world with their Book of Mormon videos and Gospel Topic essays.  They feel that these are intended to trick the world into not believing what they consider to be the "truth."

4. They Have a Limited View of Reality

Chad Daybell has also exhibited a limited view of reality.  Here's just a quick example.  When the police came to his and Lori's home in Idaho for the well check on the kids, he acted like he didn't know who Lori was.  They were married at the time.  He then tried to flee.  When the police caught up to him, he admitted that he knew Lori since she was his wife, and remembered her phone number.  It seems baffling to us that he thought that ruse would work.

As we learn about Chad's beliefs, we can easily see that it has threads of truth and doctrine woven into it, but then becomes distorted because of his limited view.  It's like Millet says, "a scientist with insufficient data..."

5. They Have a Disposition to Misread and Thereby Misrepresent the Scriptures

Sherem appeared to be extremely knowledgeable in the law of Moses.  He clearly misunderstands the law when he falsely claims that it does not point to a Christ.

Chad also has a deep knowledge of the scriptures and the gospel.  I think this is what makes his words so flattering.  He can say exactly what people want to hear and want to believe is true.  His former companions said that he was an excellent LDS missionary.  But when he interprets his dreams, like the one on the train, he misrepresents the prophets.  He even puts President Nelson in the passenger car with the members and claims that the prophet is no longer the head of the Church.

Sherem sought a sign and unfortunately got what he wished for to his own demise.

Chad Daybell has built a business around seeking signs.  I've noticed that many of his followers, those who are affiliated with him, and even those who no longer claim to be affiliated with him, love to write about the signs of the times.  It's easy to see why it's such a popular topic.  I had to laugh though when I discovered that someone's book about how the end will be in "a few years" is now being printed as a 20-year anniversary edition.

DEFENSE AGAINST AN ANTI-CHRIST

So what are we supposed to do when we meet an anti-Christ, or wonder if the person we meet is an anti-Christ?  Fortunately, Jacob gives us a model to follow.

Brigham Young gives some counsel about how we can perform a test to know whether something is true doctrine.  Ask these questions:

1. What do the standard works have to say about it?
And I'd like to add that 2 Nephi 31 is the pure doctrine of Christ.  That chapter is a good one to check against any teachings that you come across.

2. What do latter-day presidents of the Church say about it?  Particularly the living president?

We have a living prophet who speaks to us often, not just twice a year.  We are so blessed that we can access his words any time we want.

3. What does the Holy Ghost say about it?

Now Brigham Young warns that this one can be tricky.  Have you ever met someone who has told you that the Spirit told them something and you thought, "That doesn't sound right."? Brigham Young warns us that this channel of communication only works if we are clean and virtuous and uncluttered with sin.  Make sure you are constantly repenting and seeking forgiveness when seeking personal revelation.


As we get closer to the second coming of Christ, I think we will see more not less anti-Christs.  Jacob was apparently finished with his writings, when years later he decided to add a specific story about a specific person.  What's interesting to me is that he had concluded with an interpretation of an allegory so long, that it's the longest chapter in the Book of Mormon.  And what is included in the allegory?  A lesson about good and wild fruit.  The need to recognize the difference.  And what does he feel is important to open up his record again year later to include?  A lesson about how to recognize the sweet fruit of the gospel.

At the end of the story, Jacob tells us that the "love of God was restored again among the people;"  and how did this happen?  "they searched the scriptures..."  (Jacob 7:23)

We don't need to become knowledgeable in what the anti-Christs have to tell us so that we can debate them point by point.  All we need to do is study the truth, that way we can recognize when we don't see it.