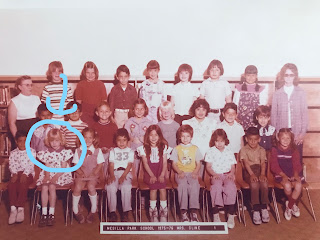 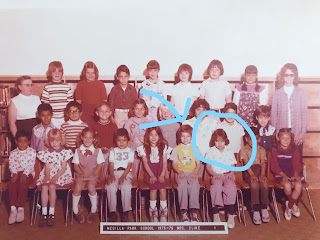 In this scene, I would play ring around the rosy with other children and pretend to do chores.

Rachel got to lazily lie on the lawn as people brought her cookies in a basket.

One year, I begged the director to let me be a Lamanite just for one night.  He said that I couldn't because of my blond hair and blue eyes.  I kept begging and he finally agreed.  But he said I had to go to makeup first.  It was there that they put this weird lotion on me and that made my skin turn brown.  After fitting me with a peachy orange tunic, I was good to be a Lamanite child.

Turns out lying in the grass under hot lights is not as fun as I thought it would be.  And those cookies were just those gross sugar wafers.

The next night I happily went back to being a Nephite.

As a child I didn't realize it, but I was being taught a powerful lesson.

At no point was I told that my skin color or hair color prevented me from being a Nephite, only a Lamanite.

My guess is it never occured to the darker-skinned children to ask to switch sides like I had.  They knew their place.  Or maybe they liked those gross sugar wafers.

But here's the deal.  The lesson I learned was wrong.  Nephi's kids looked just like Laman's kids.

And what did they look like exactly?  I don't know, they didn't have Instagram back then.  But they probably looked like most of the other Jews in Jerusalem at that time.

So why was the director separating the actors by skin color?

And he had caused the cursing to come upon them, yea, even a sore cursing, because of their iniquity. For behold, they had hardened their hearts against him, that they had become like unto a flint; wherefore, as they were white, and exceedingly fair and delightsome, that they might not be enticing unto my people the Lord God did cause a skin of blackness to come upon them.

In this verse we read what are known as idioms.

Brant Gardner explains on fairmormon.org why we shouldn't take the last idiom literally either.

I don't want to go into all of his excellent arguments as to why, but sufficeth me to say that just because they separated from their brothers Nephi, Sam, Jacob, and Joseph doesn't mean their skin color literally changed.

When we say that we are green with envy, do we turn into Elphaba?

When we say she has a yellow streak down her spine, does she really have a yellow line down her back?

When we say he bled his boss white, did his boss literally turn white?

What does it mean to have the cockroach?

It's a French idiom to mean you are depressed.

What does it mean to find your half orange?

It's a Spanish idiom to mean you have found your perfect mate.

What does it mean when someone tells you that you wanted the bicycle?

It's an Italian idiom to mean you have to live with your consequences from your choices.

So were the Lamanites literally cursed? I think they were.

When you read Lehi's finally message to his children (except we don't know what he said to Nephi, hmmmm....)  It's clear he's pleading with all of them (except Jacob because I think he already had) to make covenants and keep the commandments.  This is how we can enjoy the Holy Ghost.

Laman and Lemuel repeatedly show an unwillingness to make those covenants.

To learn more about this, you can read my article "Thoughts on Laman and Lemuel: The 'bad guys' in the Book of Mormon"

So I think they were cursed in the sense that the Holy Ghost withdrew from them and they no longer could enjoy the gifts that come with the Spirit.  Basically they were left to their own devices.  Not having the power of God in my life would definitely feel like a curse.

So does this mean the Nephites weren't racist?  No, they were.

As was common in ancient culture, the Nephites saw themselves as the center of the universe.  They were good.  Anyone not in their culture was bad and inferior.  The Israelites felt this way about the Greeks.  The Greeks felt this way about what they called barbarians.  And on and on.

The Nephites avoided what is known as exogamy, or marrying outside of the group.  Nephites would not marry Lamanites because they did not want their curse.

The Nephites were definitely racist, it's just that skin color wasn't the problem.

We know that this is true when we read Alma 55:4-7.  Captain Moroni had to inquire as to whether there was a Lamanite in his troops.  When they found one, he was put in with the Nephite guards in order to trick the Lamanites.  If as a Lamanite he had a different skin color, none of that would have worked.

If I could go back in time, I wish I had asked the director to let Rachel be a Nephite girl with me.  This was in the early 1980's when the common belief was that the curse was the skin color.  But we don't live in the 1980's anymore.  We are in the 2020's.  And when we know better.  We do better.

Kristina Murri said…
Thanks for your article! I have always wondered too what Lehi said to Nephi.
February 8, 2020 at 5:11 PM