"Who Is My Neighbor?" Lessons from the Priest and the Levite in the Parable of the Good Samaritan

Jesus Christ gives the parable of the Good Samaritan to answer the question, "Who is my neighbor?"  (See Luke 10:29)

Often we focus on the third person who sees the half dead man and stops to help him.  The Samaritan.

Instead I'd like to focus on what we can learn from who DOESN'T stop to help.

Jesus tells us that not only did the priest not stop to help the injured man, but he also went out of his way to avoid him and crossed to the other side of the road.

Have you ever wondered why he did this?

To get a better understanding of why he would cross to the other side of the road, let's look at what it meant to be a priest during Jesus' time.

Priests were the only ones allowed into the temple.  And before entering the temple, each would be examined by the other priests and the Levites and checked for impurities.  They are examined for skin diseases or broken bones.  If they are found to be pure, they can enter the temple.

One of the ways a priest became impure was if they touched a dead body or even was in the presence of a dead body.

According to my friend Daniel Smith who is an expert on Jewish culture, the Pharisees built a fence around the laws found in the Old Testament so that they would not even come close to breaking those laws.  So not only will the priest not stop to help a man who might die under his care, he goes out of his way not to come close him.

What is Christ trying to teach us by using a priest in his story?  Let's go back to the question the lawyer asked:


Who is my neighbor?

As a child of the 70's it's hard to hear the word neighbor and not think of Sesame Street.

Bob singing "Who Are the People in Your Neighborhood?"

Modernly we think of neighbors as people who live near us.

But just 100 years ago it had a different definition.  It meant someone of the human race or anyone that needs our help or to whom we have an opportunity of doing good.  In other words, everybody.

The priest had an opportunity to do some good to the man who had just been robbed and beaten.  But he did not help because it would have meant that he would have had to broken a law to do so.  And what would have happened if he had broken the law by touching a dead man?  The priest would have undergone a 7-day purification process before he would be considered clean again.

As I think about the actions of the priest, I wonder how as members of the Church of Jesus Christ of Latter-day Saints we choose to pass by others on the other side road like the priest did.

That's Charlie Bird who said that he felt shame and isolation because he knew he was gay.  He said "As I integrate my sexual orientation with my church activity and faith in Jesus Christ, my future sometimes seems bleak and overwhelming."

Does she look familiar?

After getting baptized she moved to Utah despite her friends telling her not to.  She ended up at Cafe Rio holding a book about one of the prophets of the LDS Church.  Someone tapped her on the arm and said, "You know...it's pretty ironic you look the way you do holding that book."

I find the second character, the Levite,  in this parable pretty interesting.  In the parable we find a subtle difference between what he does and what the priest does.

I get the impression that the priest could see the unfortunate man was in trouble from a distance and didn't want to go near him.  But it seems like the Levite allowed himself to get close enough to look at him.  Unfortunately, he too decides to cross to the other side.

Levites performed chores in the temple.  They had no restrictions from touching a dead body.  He would have broken no law to have stopped and helped.  So why didn't he?

One possible answer is he didn't think he could.  Maybe he thought he was too lower class to help or lacked the power to save him.  Maybe the man's injuries seemed overwhelming and the Levite didn't even know where to begin.

Do we ever do that?  Do we avoid helping others because we feel inadequate or are afraid of breaking the "rules?"  In our efforts to be like someone else, do we lose sight of the fact that we need to be like Christ?

As I think about this parable, I can see I have just as much to learn from the ones who don't stop as I do from the Samaritan who does.

#1 - I need to see everyone as my neighbor.  Not just those who are my friends, physical neighbors, family members, co-workers, or church goers.  If they are on this planet, they are my neighbor.

#2 - Some rules compete with each other.  I need to make sure I pick the right ones to obey.  We don't shop on Sunday.  We visit the sick and the needy.  If a loved one gets hurt Sunday morning and I don't have enough gas to get to them, it's more important that I visit the person than avoid shopping on Sunday.

#3 - We are not defined by our labels.  Just because we have an important responsibility, doesn't mean we are automatically important.  None of us are too important to help someone else, especially when we are in a position to do so.

#4 - We are not defined by our labels.  Just because we DON'T have an important responsibility, doesn't mean we aren't important.  All of us can help someone else.

#5 - Be careful whom we choose to follow.  In today's world it's easy to get caught up in following the latest trends, fashion, and lifestyles of other people.  There is only one path that takes us home and that is by coming to Christ. 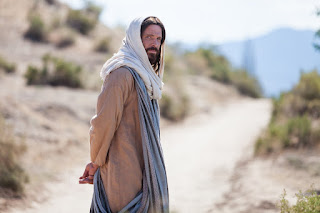 For more information on the priests and Levites, click here.

This article is to coincide with the Come Follow Me 2019 Lesson "What Shall I Do to Inherit Eternal Life?" 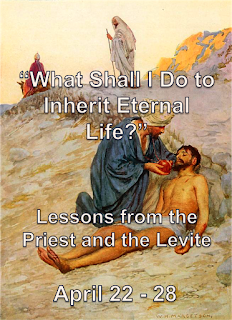 Not an official publication of the Church of Jesus Christ of Latter-day Saints.
come follow me 2019 Jesus Christ LDS beliefs