"For She Loved Much": The Story of Simon and the Woman with the Alabaster Box

"For She Loved Much"—

The Story of Simon and the Woman with the Alabaster Box


When you think of Ebenezer Scrooge, what comes to mind?

That's what we mean when we say, "He's such a Scrooge."  Someone who hates Christmas.


Now let me ask you this.  Why don't we call someone a Scrooge who is generous and loves Christmas?

Because that was Ebenezer Scrooge at the end of the story.

Yet for almost 200 years we continue to identify him as what he was instead of what he became.

The answer might be found in the New Testament, specifically  Luke 7:36-50.

It's story about a Pharisee named Simon who invites Jesus into his home.  A woman comes in with an alabaster box of ointment and washes Jesus' feet with her tears and dries them with her hair.


This upsets Simon.  This woman is a known sinner throughout the city.  I don't want to go into too much supposition or details, but based on what Simon calls this woman, he most likely felt justified as to why no one should be touched by her.1

Simons then criticizes Jesus for allowing this woman to touch him and wash his feet.  In response, Jesus tells Simon a parable of two debtors.

Each debtor owes the same creditor.  One owes 500 pence and the other 50.  The creditor forgives both loans.


which of them will love him most?

The answer is obvious.  The one who owed 10 times as much.

Before I share my thoughts as to what I think the answers are, I'd like to compare the two side by side.

Gaye Strathearn, a BYU religion professor, interprets the actions of this woman to show that she had already been forgiven by Christ and was now coming to Simon's home to show gratitude.2  Others believe the woman came seeking forgiveness.  But no matter what the case may be, all can agree that she left Simon's home forgiven of her sins.  She left a clean woman, a sinner no more.  Her debt had been paid.  But Simon couldn't see her that way.  Whatever sins this woman did commit, Simon is the one in this story who labels her a prostitute.  Christ and Luke do not.

It's as if Simon is saying, "Once a Scrooge, always a Scrooge."

He can't accept that this guest he invited into his home has the ability to forgive people of their sins.  He doesn't recognize Him as the Messiah.  I believe that is why he is called out for not showing the same honor and respect for Jesus as this woman has.  He isn't able to recognize Christ for who He truly is.

Christ ends the parable by saying

Her sins, which are many, are forgiven; for she loved much: but to whom little is forgiven, the same loveth little.


Is Christ saying that in order to love much we need to have many sins? If we don't commit a lot of sins then we can only love Him a little bit?

That sounds ridiculous, right?  Of course Jesus isn't encouraging us to sin just so that we can love God more.  So what could He possibly mean?

If you look closely at the sentence, you'll see the words "which are many" are separated by two commas.  This means that it is a non-defining clause, or in others words doesn't change the meaning of the sentence.  Christ could have said,

Her sins are forgiven; for she loved much:


and it still makes sense.

Looking at the second part of his comment, you'll see that Christ says

but to whom little is forgiven

but to whom sins a little

But here is what I think.  They both were 500-pence sinners, but only one of them knew it.  We all are.  Not because of the amount of sins we commit, or because of the seriousness of our sins, but because King Benjamin tells us in Mosiah 2:21:

I say, if ye should serve him with all your souls yet ye would be unprofitable servants.  [emphasis added]3


We love much when we acknowledge just how much we are indebted to the Savior.  The more we come to know Him and want to keep His commandments, the more we realize that we fall short.  This in turn motivates us to repent more and draw upon His saving grace.  That is how we are forgiven more.

Simon's problem wasn't that he had sinned.  His problem was that he didn't think he had—or that he was just a 50-pence sinner.  He was too focused on the sins of someone else—an unnamed woman whom he thought was unworthy to touch Jesus. Someone who shouldn't be forgiven of a 500-pence debt.

Comparing our sins to others is a dangerous road to travel.  In Luke 6:41 Christ warns us of this.

And why beholdest thou the mote that is in thy brother's eye, but perceivest not the beam that is in thine own eye?


or put another way, "Why worry about someone else's debt without noticing your own debt?"

When we are willing to perceive the beam that is in our own eye, we will come to a realization just how much debt we owe the Savior, that He has already paid that debt, and then we will love much.

In summary, these are the uncomfortable questions that come to my mind when I read about Simon and the unnamed woman.

1. Do I wrongly see myself as someone who can pay my own debt or reduce it through righteous living?
2. Do I wrongly compare my sins to others and think, "Well, at least I'm not as bad as they are."
3. Am I willing to see people as they are and not as what they once were? (Like Ebenezer Scrooge)
4. Would I be able to wash Jesus' feet with my own tears?  Do I love much because I repent much?

I know there are tons of speculation as to who that woman was and what her sins were.  But to me it doesn't matter.  She left Simon's house debt free.  That is what matters.

1. Touching impure people or things, made one also impure.  For a detailed description of what could not be touched, click here.
2. To read Gaye Strathearn's talk on this story, click here.
3. To watch Elder Joseph B. Wirthlin's talk about how we are unprofitable servants, click here.
4. To see a video of how The Modern Lost Sheep was created, click here. 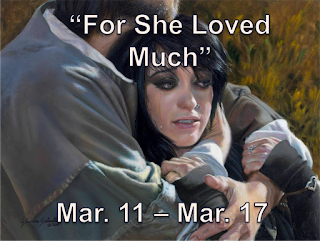 Who is my neighbor?  Lessons from the Priest and the Levite.