January 19, 2019
In the first chapter of John, Nathanael is invited to come and see that Jesus is the Christ.  This week I decided to do the same.


For a more detailed version of this article including historical information, links to sources, and more analysis, click here.

Many wrongly assume that Christ was Jesus' last name, a way to distinguish him from all other men walking around named Jesus.  Christ was a role, not a name.  It meant he was anointed to become a king and save the oppressed Jews.

Note: Christ is Greek for the Hebrew word Messiah.

Or so the Jews thought.  You see they were experiencing oppression from the Romans and had a corrupt king, Herod.  Isaiah had prophesied that a king would be born and he would rule the earth.   The Jews liked the idea of being on top again like when David and Solomon were kings.

Traditionally, kings were announced by a prophet.  In Malachi 4:5 they were told that Elijah would be the prophet to usher in the King of Kings signaling the end of times.  This is why John the Baptist is asked if he is Elias.

Note: Elias is Greek for the Hebrew word Elijah.
And just who is doing the asking?  The Pharisees.

To understand who the Pharisees are, I think it's important to know the different sects that existed in Jerusalem at that time.  Again, if you want a deeper description of the sects, hop over to the detailed version of this article.  You'll get the historical background as to how these sects formed.

PHARISEES - This was a group of people who wanted to see a strict observance of the law of Moses.  They wanted life to be what it was like when David had been king.


SADDUCEES - This was the Jewish aristocracy.  They were happy with the status quo because it meant they could keep their power and prominence.

Note: Pharisees and Sadducees did NOT like each other, but had to work together as members of the Sanhedrin.

ZEALOTS - These people wanted to rebel against the Romans and become a free people.

John the Baptist tells the people sent by the Pharisees that he isn't Elijah, meaning this is not the end of times.  But what he does explain is that Jesus is the Christ, he's the Son of God, and He is here to save.  It is because of Jesus we will be able to have eternal salvation and live with our Heavenly Father forever.

Over 2000 years later, this concept isn't too hard understand.  Jesus Christ is a prominent figure in our society.  We see him in artwork, hear him praised in music, and churches even bear his name.  We have two major holidays centered on Christ, his birth

But none of that existed when we meet the people in the first chapter of John.  They are asked to accept that an ordinary carpenter is the Messiah.


We learn at the end of the chapter that Nathanael does indeed recognize Jesus as the Son of God and as the King of Israel.

Lesson #1 - Faith is harder BEFORE it happens.

I'm realizing just what a leap of faith it was for these people to see an ordinary carpenter now an itinerant rabbi as the Messiah.

This makes me think about events I'm required to believe in that haven't happened yet.  The biggest one that comes to mind is Jesus Christ's second coming.  We know it is coming.  We know the events that will occur beforehand.  We know that he will become the King of Kings and rule all the earth.  The government will be on His shoulders.

But will I recognize Him when he comes?  Will I know Him as the Messiah?

It's easy to long for the past.  We look back and think about how much simpler life was.  No cell phones to charge.  No texts to distract us.  I recently saw a video of two teenagers trying to use a rotary phone.  They didn't even know what a dial tone was.  Ahh, the good ol' days.

But we are on this earth to progress, not stay the same.  The world is changing.  The Church of Jesus Christ of Latter-day Saints is changing.  Society is changing.  Are we like the Pharisees and want to go back to when everything was decided for us and life was "easier."  Or are we like the Sadducees and just want to keep things as they are?

Lesson #3 - Worldly problems are temporary, salvation is not.

Remember Simeon and Anna who saw Christ in the temple when Jesus was 40 days old?  Those two had seen some stuff.

I think Simeon had an eternal perspective and didn't look to Jesus to save him from Roman tyranny.  He looked to the Christ to save him.  I think he knew that this time on earth was temporary, but living with God was eternal.

I remember years ago reading an Ensign article by Elder Kevin W. Pearson called Improving Your Personal Prayers.  In it he says:

How often do I pray for my circumstances to change?  If I was paying taxes to the Romans and was ruled by a corrupt king would I be praying for that to stop?  You bet I would!  But what about my life in 2019?  We see corruption, deception, bribery, calamities, etc.    At times I have difficulty remembering that our God in heaven is in charge and knows all.  I realize that like those in Jerusalem, I want it all to be wiped away... like now.  Am I praying for my trials to go away or am I praying that I might be changed in those trials?

Oh boy, studying this chapter has woken me up to so many things I need to work on, I couldn't possibly tackle them in a week.

Here are some goals that I have:

1. Don't let the world news get me down.  Keep reminding myself that God is in charge and knows all.  Christ will come again, no one can stop Him from becoming our ruler.

2. Make sure my prayers are about changing me and not my circumstances.

3. Be willing to accept changes and don't wish for the past.


If you'd like to learn more about the historical and political context that formed the sects and made it difficult to accept Christ, you can read this article in greater detail.

Come and See: Recognizing Christ as King - In Detail


This is not an official publication of the Church of Jesus Christ of Latter-day Saints. 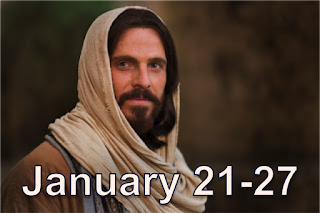