Pop Quiz:  Why did Mary and Joseph present their newborn, Jesus, at the temple? 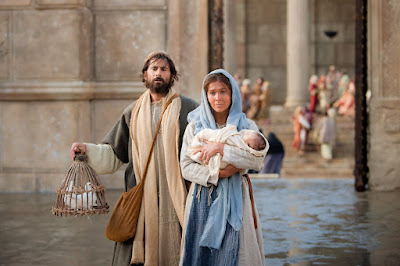 For the answer, we need to go back.
Further back.

When Moses was trying to free the children of Israel from bondage in Egypt, one of the plagues was for all the firstborn sons to be killed.  However, if the blood of a lamb was on the door posts, the angel of death passed over the household and the newborn was spared.

As a result of this miracle, all firstborn sons were able to hold the priesthood.  Until…

Moses came down from Mount Sinai and discovered everyone worshipping a golden calf.
Well not everyone.  The sons of Aaron weren’t.  So the priesthood was taken from all the firstborn sons and only those who were of the tribe of Levi (sons of Aaron) could hold the priesthood.

The Lord then commanded that all firstborn sons needed to be redeemed at least 30 days after the child is born.

This commandment can be found in Exodus 13:13 [emphasis added].


And every firstling of an ass thou shalt redeem with a lamb; and if thou wilt not redeem it, then thou shalt break his neck: and all the firstborn of man among thy children shalt thou redeem.

In addition to the firstborn son being redeemed, the mother was to be purified at the temple 40 days after the birth of her firstborn son.  Leviticus 12: 2-4 explains:


2 Speak unto the children of Israel, saying, If a woman have conceived seed, and born a man child: then she shall be unclean seven days; according to the days of the separation for her infirmity shall she be unclean.
3 And in the eighth day the flesh of his foreskin shall be circumcised.
4 And she shall then continue in the blood of her purifying three and thirty days; she shall touch no hallowed thing, nor come into the sanctuary, until the days of her purifying be fulfilled.


And that is why Mary and Jesus were at the temple.  She was there to be purified; he, redeemed.

In order for the redemption to occur, the parents were commanded to pay 5 shekels of silver to the priests of the temple.


And those that are to be redeemed from a month old shalt thou redeem, according to thine estimation, for the money of five shekels...

In order for the purification to occur, two sacrifices must be made.  One as a burnt offering (a lamb) and one as a sin offering (a turtle dove).  Leviticus 12:6 explains:


And when the days of her purifying are fulfilled, for a son, or for a daughter, she shall bring a lamb of the first year for a burnt offering, and a young pigeon, or a turtledove, for a sin offering, unto the door of the tabernacle of the congregation, unto the priest:


However, if the couple cannot afford a lamb because of poverty, Leviticus 12:8 says that a different option is available for them.


And if she be not able to bring a lamb, then she shall bring two turtles, or two young pigeons; the one for the burnt offering, and the other for a sin offering: and the priest shall make an atonement for her, and she shall be clean.

Luke tells us in 2:24 that they brought two turtledoves, indicating that they were very poor.

And to offer a sacrifice according to that which is said in the law of the Lord, A pair of turtledoves, or two young pigeons.

But wait a minute!  How could they be poor?  Didn't the wise men deliver expensive gold, frankincense and myrrh to the Christ child?

Yes, but not yet.  Jesus is only 40 days old.  They haven't seen the wise men yet despite what every nativity scene tells you.

While at the temple, Jesus, Mary, and Joseph see two people mentioned by Luke.  Anna and Simeon.


Simeon had been promised that he wouldn't die until after he met the Messiah.  Simeon was impressed by the Spirit to go to the temple and saw Mary and Joseph there.

Note: Tradition says that Simeon was a translator of the Septuagint, making him over 200 years old when he sees Christ.

Anna, on the other hand, attended the temple every day.  Consequently, she was there too.

Note:  Some believe that Anna was 84 years old.  But Luke could have been saying that she was a widow for 84 years, which would make her about 105 years old.

Both Simeon and Anna recognized Jesus as their Savior and King.  Both prophesied that he had come to redeem Israel.

A light to lighten the Gentiles, and the glory of thy people Israel [Luke 2:32].

So what does this have to do with groundhogs?  Here's where it get's interesting.

Because of Simeon's prophesy, this day was known as Candlemas or the blessing of the candles.  The Roman Catholic Church blesses all the candles that are to be burned throughout the year.  This is because candles symbolize the light that Simeon mentions, Christ's light.

When the birth of Christ was officially recognized as December 25, the official day of Candlemas became February 2.  This day happens to be exactly in the middle of winter solstice and the Spring equinox, which was a Pagan holiday.  In Britain there was a tradition that badgers came out of the earth to check the weather.  If it was sunny, winter would be cold and dreary until the equinox.  If it was bad weather, winter would be warm and sunny until spring.

Does this sound like a familiar holiday?  Of course, it's Groundhog Day.


Did you ever realize that Groundhog Day was connected to the birth of Christ?  I didn't either.  Here are some other traditions that have formed on Groundhog Day or Candlemas.  Some are pagan, some are Christian.


I think I'm going to make crepes and pancakes this year for Groundhog Day.  Who's with me?


Anyway, where were we?  Oh yeah, Simeon and Anna at the temple with the Christ child.

As I ponder this story and all it implies, here are some lessons that come to my mind.

1. Even though Mary and Joseph could not afford a lamb, they brought to the temple the Lamb.

2. Christ was presented at the temple for redemption, but it was He who would redeem all mankind.

3. Like Simeon, when we are moved upon by the Spirit to do something, we should do it.

4. Like Anna, we need to practice our faith daily.  If we do, amazing blessings await us.

5. Both men and women can prophesy.

6. The Lord fulfills His promises.  It is for us to patiently wait upon Him to do so.

7. Get your Christmas decorations taken down by January 6, or you are stuck with them until February 2.


So what are my plans for this week as a result of this story?

1. Think about blessings that I have been promised that have not been fulfilled and remind myself that the Lord fulfills His promises.

2. Focus on acting on promptings by the Spirit and recording any blessings I receive as a result.

3. Look for more examples in the scriptures of women prophesying.

4.  Express my gratitude to Heavenly Father for offering his firstborn son as a sacrifice to redeem me.


All photos are from lds.org unless otherwise sourced.

This is not an official publication of The Church of Jesus Christ of Latter-day Saints.
This post coincides with the January 14-20 lesson of the Come Follow Me 2019 Individual Study Manual. 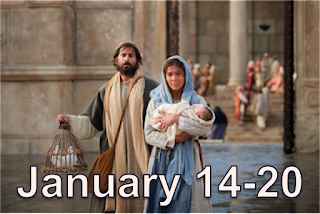