The LDS Faith and Islam: What They Have in Common

May 07, 2018
Mormons* and Muslims, what do they have in common?  Probably much more than you would think.

Islam is the second largest religion in the world.  The Church of Jesus Christ of Latter-day Saints  is the third largest in the United States.

Recently in the LDS Church Magazine The Ensign, Daniel C. Peterson a professor of Islamic Studies and Arabic at BYU wrote an article about the Islam faith.  I'll summarize his article and add a few other things I learned attending a lecture by Dr. Victor Ludlow at BYU Education Week.

Here are some tenets of faith that the two religions have in common.

Both religions pray.  Muslims pray five times daily while prostrated on the ground facing Mecca.  They also offer spontaneous prayers that can be offered at any time and don't require prostration.

Although not required, Mormons traditionally offer prayers in the morning and at night and before each meal.  These are not scripted.  Before the Sacrament is administered on the Sabbath, a priesthood holder (one who has been ordained to at least a Priest within the Aaronic Priesthood) offers a scripted prayer.  Prayers are also offered within LDS temples.


When a mosque was burned in Bellvue, Washington.  An LDS congregation offered their building close by so that their Muslim neighbors would have a safe place to pray.

To read a story about this event, click here.

The shahada is Islam's universal creed.  It is a profession of faith.  To recite it with sincere belief is the way to become a Muslim.

Mormons dedicate one Sunday month after partaking of the Sacrament to allow anyone who so desires to declare their testimony.  Members are also encouraged to share their testimony at any time and with anyone as deemed appropriate.  In order to be considered an official member of the LDS church, one must be baptized.

Zakat is giving charitable donations to the poor, mosques, and other Islamic undertakings.  It is generally given as a percentage of the Muslim's total wealth.  In some countries it is gathered by government institutions, in others it is voluntary.

The LDS Church asks for a tithing of 10% of all earnings or increase.  Most members pay this monthly or whenever they so desire.  At the end of each year they meet with the Bishop and declare if they paid their tithing in full.  In the United States the Church also provides a document showing how much a member paid in tithing so that they can declare it as a deduction on their income taxes.  Some people assume this tithing is required, but it is voluntary.

During the entire lunar month of Ramadan, Muslims abstain from food, drink and sexual relations between sunrise and sunset.  They also use this time to provide special charity for the poor.

Mormons fast once a month for a 24-hour period abstaining from food and drink.  This is typically done on the first Sunday of each month, but can vary based on meeting schedules and other events.  Members are asked to donate the cost of the two meals to the church to feed the poor and help the needy.  This donation is called a fast offering.

To read more about the LDS beliefs on fasting, click here.

In June 2017, an LDS congregation and Muslims from a nearby mosque met to break their fasts together.  To read more about this amazing event, click here. 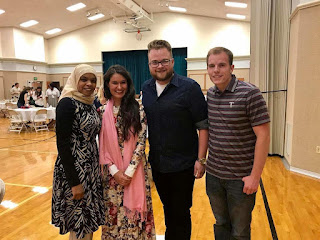 Muslims who have the health and resources go to Mecca, holiest city of the Islam faith, at least once in their life.  This is a spiritual and moving experience.


Mormons are encouraged to attend a temple at least once in their life by striving to live worthy of a temple recommend.  Temples are considered to be holy places where spiritual experiences and learning can occur.

The Qur'an consists of 114 chapters of words written by Muhammed. Muslims consider it to be revelations revealed to him by Allah (God).  The Qur'an speaks of the creation of the world and universe, the fall of Adam and Eve, and Abraham figures prominently.  Mary, the mother of Jesus Christ is mentioned 34 times.  (She is mentioned 19 times in the New Testament.)

Mormons read a book of scriptures called the Doctrine and Covenants.  It comprises of 138 sections (chapters) that are words revealed to prophets (predominately Joseph Smith) and considered to be the word of God.

Muslims have dietary requirements that forbid them from eating meat of an animal that died of itself, blood, pork, or food dedicated to something else other than God.  Additionally, they cannot eat animals that were killed in the following ways, strangled, beaten, falling, gored or devoured by a wild beast.  Prophets cannot eat donkey meat, and birds of prey (with talons like an owl), predators with fangs (cats, dogs, lions), snakes, lizzards, scorpions, and mice are forbidden.   They also are forbidden to partake of intoxicants, specifically alcohol.

To read more about the Islamic dietary laws, click here.

Mormons observe what is known as the Word of Wisdom.  This is found in the 89th section in the Doctrine and Covenants.  Most people know Mormons don't drink coffee, tea, alcohol or smoke.  But the Word of Wisdom also gives advice on eating fruit in its season, avoiding excessive meat consumption unless it's winter or in times of famine, and eating herbs (vegetables).  I have heard the Word of Wisdom described as a whole foods plant-based diet.  Mormons are not told to become vegetarians or vegans, although some Mormons choose to do so.

To read more about the Word of Wisdom, click here.

After the death of Muhammed in 632 AD, there was a disagreement as to who should be succeed him.  As a result, two factions were born.  Those who claimed to follow Muhammed's customary practice and are flexible about succession, came to be called Sunni.  Those, led by Muhammed's son-in-law, believed the right fell on Muhammed's nearest male relative. They are called Shia or Shi'ite Muslims.  Although the Muslim faith is divided into two factions, it is considered historically to be much more unified than the Christian religion.

To learn more about Sunni and Shia, watch this short video.

After the death of the prophet Joseph Smith, there was some disagreement as to who should be the next prophet.  This succession crisis caused smaller churches to form as a result.  Most members did stay within the LDS Church when Brigham Young was called to be the next prophet three years later.  One church that was formed is known as the Reorganized Church of Jesus Christ of Latter-day Saints.  This church is not affiliated with the LDS Church and its members are not considered to be Mormons.  Other churches have also been organized that read the Doctrine and Covenants and Book of Mormon.  Some of these churches have horrific practices in the name of their religion.  The LDS Church has denounced such organizations.

To learn more about the LDS succession crisis, click here.

What do Mormons think of Muslims?

The LDS Church has a history of love and respect for Islam.  In 1841, the Nauvoo City Council Latter-day Saints passed an ordinance on religious freedom.  They guaranteed equal privileges to all religions including Muslims.

In 1855, when many Christians were calling Muhammad an anti-Christ, two LDS Apostles gave lengthy sermons about Islamic history.  They declared Muhammad "was no doubt raised up by God on purpose." (See Journal of Discourses 3:28-42)

The Qur'an suggests a way that we can live peacefully together:


"If God had willed, he could have made you a single community.  But he desired to test you in what he has given you.  So, compete with one another in good deeds.  You will all return to God, and he will inform you regarding the things wherein you used to disagree."  ~Qur'an 5:48.

An Ensign article was published in August 2000 by James A. Toronto titled, "A Latter-day Saint Perspective on Muhammad."  To read it click here.

*Note: I try not to use the nickname Mormon, but instead refer to members as Latter-day Saints.  But I like how for this article both Muslim and Mormon start with the letter "M" so I used Mormon instead.  Mormon or Mormonism is not an official name or title, but a nickname for those who belong to and practice the religion of the Church of Jesus Christ of Latter-day Saints.

2018 LDS LDS beliefs Love One Another