The New Superhero: Teaching our Children to be Social Justice Champions

May 02, 2018
I realize this isn't going to make me very popular, but I must confess something.  I have a hard time staying awake during the Marvel movies.

Not because they are boring, but because I get so confused.  I think I know who the good guys are, but then something happens to them and they are bad.  Or sometimes a bad guy seems to do something good.  But wait, no, they were pretending to be good.  Or is the good guy just pretending to be bad?  As I try to figure out what's going on, the noise and flashes lull me into a sleep and I end up taking a $17 nap.

It's been 35 years since I was in junior high, but my guess is that being in middle school is similar to being in a Marvel movie.  Who can you trust?  Who is a true friend?  Who will betray you?  Does that cute boy in math class really like you, or are some bullies pretending to be him on Instagram to embarrass you?

On April 30 and May 1, Katey McPherson from the ECRA Group spoke to hundreds of parents in Pleasant Grove, Utah about the harmful mental health effects on social media on tweens and teenagers.  This article is a summary of what she taught.

To read a summary of what was discussed at those two events, click here.

She gave the parents a call to action: to teach tweens and teenagers (from now on I'll just call them teenagers, but it's anyone ages 8 to 18) how to be social justice champions, a new kind of superhero. These are kids who know better so they do better.  They look out for their peers and are able to transform their pain instead of transmit their pain by lashing out either in person or online.


A teenager needs three things to be a social justice champion. 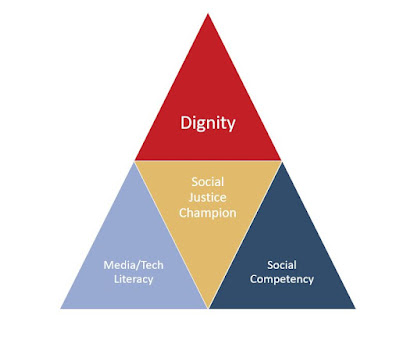 First let's talk about dignity.  Walk into any elementary, middle, or high school, and I bet you won't have to go very far before you see the word "respect" written somewhere on a wall, poster, plaque.  For years we have been teaching our children respect.

Katey realized that what teenagers also need to learn is dignity.  Dignity is knowing your own worth.  If one has a strong sense of self, they won't negotiate their worth in order to fit in with others.  They won't compromise their standards because they know their inherent worth.

I'm going to step away from my notes on Katey's lecture for a second and give my two cents on this.  Telling children they are beautiful, talented, wonderful, strong, perfect, and can do no wrong, does not give them self-esteem.  That gives them adult-esteem, or a knowledge of what an adult thinks of them.  That's not a bad thing, but it shouldn't be confused with self-esteem or self-worth.  Years ago I heard someone say that self-esteem comes from confidence and competence.  When my kids were little, I strived to give them opportunities to feel both confident and competent.  When they accomplished something on their own and did a good job, I saw their self-esteem grow.  Okay, back to the notes.

Now this isn't to say that when a child has been physically, sexually, or emotionally abused they shouldn't seek help from an adult.  But we now have children who run to an adult when someone pushes them off a swing because they don't know what to do next.  Katey says that we need to teach our children how to resolve their own conflicts.  They need to learn how to push back.  They need to learn how to fail, how to feel pain, how to pick themselves up, brush themselves off, and try again.

Sorry, got to jump off the notes again.  When my kids were super little, a certain Englishman and I took a parenting class at our church.  We were taught that our children need to learn how to resolve their own conflicts with each other and that as parents we shouldn't always try to find out "who started it."  So when my kids got into a fight and one ran to me for help I would say, "Do you need me to help you figure out what words you need to say next?"  I would teach them "I feel ____ when you ____" statements.  I also tried my best not to get in between the siblings (both figuratively and literally) so that they knew this was something between them and not me.  Some of my favorite memories were when I would overhear one child say to another, "I feel sad when you take my toy away.  I would like you to give it back to me please."  Back to Katey.


Our teens need a clean, shiny digital footprint.  When they apply for colleges and jobs, the admission officers and potential employers are going to look up their social media profiles online.  Within 20 seconds they will decide whether to keep or toss the application.  We want our children to be found online.

Some teens don't realize how permanent their online presence is.  They think the pictures they post are only seen by their small group of friends.  They can lose scholarships, jobs, and other opportunities for racial, provocative, or pornographic posts.  They shouldn't feel safe thinking that the picture will "disappear" in 24 hours, or once it's opened by someone else.  There are apps designed to pull those photos without the users' knowledge and take screenshots of it before it "disappears."

I stupidly googled "teen selfie" to insert a picture here of a teenager taking a picture of herself.  Oh boy!  I now know of at least 100 girls who need to read this article.  Moving on....

Me again.  I wholeheartedly endorse this.  I used to teach business communications at Brigham Young University.  I had several students in my class that knew how to Facebook, text, Instagram, etc. but weren't very media literate.  Every semester as part of their final, I put them in teams and asked them to perform a social media analysis on a major restaurant.  Frequently my students would report how much they learned about social media from that assignment.  Just because teens are on their phone all the time doesn't mean they are becoming literate in the medium.  It takes purposeful study and care to be media and tech literate.


We are living in a social media village (although sometimes I wish my village looked more like the English one in the photo above) and we are the villagers.  As adults we need to be good villagers.  We need to look out not just for our children, but for all children.  There have been times in my life when other villagers have let me know that they saw something online involving my children.  Sometimes it was due to something very serious and required major intervention.  Had those villagers not spoken up, I shutter to think where my children would be today.  I am very blessed to be a part of this village.

And I doubt these kids will make me fall asleep!

The New Cigarette: Social Media and Smartphones  a summary of the notes I took on April 30 and May 1 at the Social Media Awareness Community Event in Pleasant Grove, Utah