Why did Joseph Smith translate the Bible?

January 04, 2018
This article is not an official publication of the Church of Jesus Christ of Latter-day Saints. 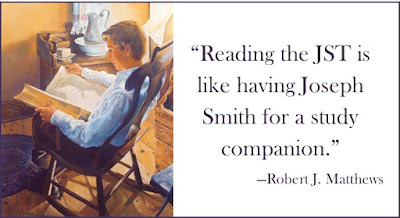 The majority of this post contains information from two articles:
"Joseph Smith's Inspired Translation of the Bible" by Robert J. Matthews, Ensign, December 1972.
"The Joseph Smith Translation" by David Rolph Seely, Ensign, August 1997.
Joseph Smith loved the Bible.  He read it often when he was young.  In fact, it was because he read the Bible as much as he did that he noticed different preachers were interpreting the same verse differently.  This observation is what caused him to question which religion was correct and go into a grove a trees to pray to find out.

To read what happened when Joseph Smith prayed to know which religion was true, click here.

Three years later, Joseph Smith received a visitation from an angel who quoted Malachi.  Joseph noticed that what the Angel Moroni was saying was slightly different than the book of Malachi he had read in the King James Version (KJV).  Read Joseph Smith--History 1:36-40. This made Joseph realize that there must be errors in the KJV.

He said that he believed the Bible to be true as it was originally written but that the errors were a result of:


Basically he was saying some errors were made accidentally and others were made on purpose.  The plain and precious truths needed to be restored.

In June 1830 he was directed by God to use inspiration and revelation to revise the book of Genesis.  This is how we have the book of Moses in the Pearl of Great Price.

While his work today is called a "translation," Joseph Smith did not translate the Bible in the traditional sense.  Meaning he did not go back to the Greek and Hebrew transcripts and render them in English from scratch.  Rather, he used the KJV to make 1. corrections, 2. additions, and 3. revisions to the biblical text.

According to Robert J. Matthews (more on this amazing man later), Joseph Smith made 4 types of changes to the KJV Bible.

1. Restored content once deleted from the Bible
2. Recorded actual historical events that were never recorded or included in the Bible
3. Inspired commentary by Joseph Smith either enlarge, elaborated or adapted to a latter-day situation
4. Harmonization of doctrinal concepts revealed to him outside of translating the Bible but then discovered a Biblical passage was inaccurate

Joseph Smith never said specifically how he did this work, but looking at the final product, scholars can get an idea of the process.

Joseph Smith and Oliver Cowdery purchased a Bible from E.B. Grandin.  This Bible was marked in ink and pencil by Joseph Smith.  He would cross out words and write symbols on the pages.  Additionally, there were five handwritten transcriptions in the handwriting of various scribes.  At the beginning they wrote out the entire passage whether it was altered or not.  That became too tedious so passages would be written that had been altered by the Prophet's inspiration and revelation.

When the Prophet Joseph Smith was killed, there were almost 500 manuscript pages and 3,410 verses altered in the KJV Bible.

After he died, Emma took the pages and the Bible as she considered them to Smith property and not Church property.  Brigham Young asked to take them to Utah with him and she refused.  They stayed in Nauvoo with her.  This single decision would result in a series of miraculous events and change Robert J. Matthews life.