October 19, 2013
When people used to ask me my ethnic background, I would reply, "I'm a European mutt."  Turns out that isn't quite true.  The more I search my family tree, the more I realize my roots come from France--more than any other country.

My most direct line to Northern France comes from my pure paternal line.  My great grandfather changed his name from DeMoulin to Buchanan.  His parents Nathan DeMoulin and Suzanne Besin were both born near Lille which is an hour north of Paris.  Their families lived there for hundreds of years.

My paternal German line is Wahl.  Wahl means "from a Romance Country."  This indicates that the Wahls were actually from either Italy or France.  But even if they were from Italy, they may still be French because...

My father's mother's line is from Northern Italy.  They were part of a group of people known as Waldensians.  This was a Christian group that moved to Italy to escape religious persecution.  Where were they from?  France.

Through my maternal Scottish line, I'm a Houston.  Turns out the Houstons originate from a family who came to Scotland from Northern France.  The fact that my ancestor, James Houston was trained to become a silk weaver is also another indication that his family were Huguenots.   Huguenots escaped religious persecution in Northern France by migrating to different parts of Europe.

My maternal great grandmother Addie Asay married John Cooper Houston.  The Asays were also French Huguenots who finally settled in New Jersey in the 1770s.  You can read their history in the poem by John Cooper by clicking here.

Finally we have my pure maternal line which comes from the Channel Islands.  They moved to Jersey Island in order to escape religious persecution, from where?  You guessed it, Northern France.

I guess it's a good thing I like crepes! 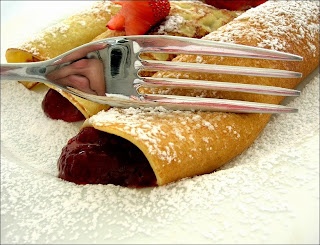